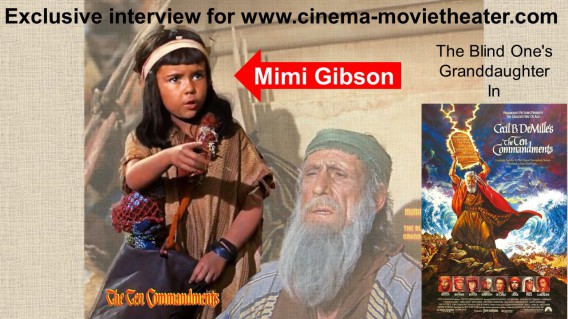 Hi Mimi, I'm very happy to do this interview.

What did you like in your character  The Blind One's Granddaughter and when you read the script about The Ten Commandments (1956)?
I was very young, maybe 5 years old when I was interviewed by the casting director and then Cecil B DeMille. We started work months later.

I never received a whole script. My part was on script sheets (called sides) that only had to do with me.

My character was a little girl fleeing Egypt with her blind grandfather and brother. My mother helped me learn my lines.

The thing I liked best was the costume and wig. It was like playing dress up. Costumes were always fun. 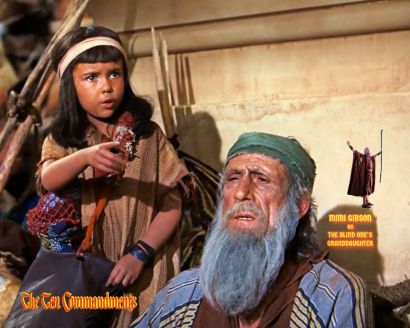 How did you get this role and has it changed the course of your career?
My agent got me the interview and I got the part.
It’s nice to know that I was in such a famous and lasting movie.

I wasn’t just part of the crowd. And boy was there a crowd! I had a speaking part and our little trio helped show what the average person went through.
I don’t think it changed anything for me. I did a lot of movies before and after.

During the filming, did you spend time with Charlton Heston, Yul Brynner, Anne Baxter, Edward G. Robinson ......... and what memories do you have of it?
We did not work with any of the stars except in the huge parting of the Red Sea with Charlton Heston (the joke on the set was he took a step down to play Moses).

We did not interact with him. There were maybe a hundred of us.

Heston was on a platform above us. DeMille was on a tall crane like thing with the cinematographer and camera and yes shouted to us through a megaphone. And he knew us.

The word on set was, don’t screw up. He would embarrass you in front of the whole cast. At the end of one take I had some business in, he yelled at me, good job, Mimi. I was very proud.
I liked being on that set and yes it was at Paramount. Ten Commandments had the whole studio. It was packed with animals everywhere. That was the best part for Bobby Clark and me. We roamed all over looking at camels, horses, mules, all kinds of large cats. It was wonderful for kids.

Did you perform with your co-stars before or after?

I worked with Yul Brynner on the Buccaneer. We were briefly in scenes together. He did not talk to me.

How long did the shooting of this movie?

I don’t really remember how long I was on this shoot, maybe two or three weeks

Where was this film shot?
All my scenes were at Paramount Studios

I started posing for calendars at 18 months, an agent saw me and I had my first movie at 2 1/2 years old.
I did not choose to be an actor. I was a good girl and did what my mother told me to do. My father died when I was a baby.

I was the breadwinner in my family and I supported us until I was 15 and supported myself after that.

I am proud of my work. I am more proud of the work we (Paul Petersen,
my big brother in Houseboat, and a handful of X kid actors) did on the Screen Actors Guild Young
Performers Committee. We changed the Coogan Law to benefit ALL kid actors and another law to help with
schooling. It took us 8 years. We were on the committee for 10 years.

If you knew kid actors, you would know
what a miracle that was. I wrote my book, Working Kid to talk about my career, but especially to talk about that
special time we all spent on the committee and also to let parents know what their job is. 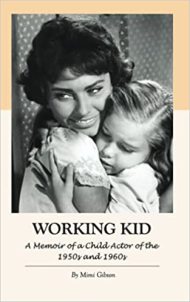 More information about Mimi on Facebook and on IMDb