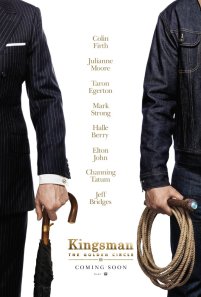 To see more videos on this movie:

When the Kingsman headquarters are destroyed and the world is held hostage, their journey leads them to the discovery of an allied spy organization in the US called Statesman, dating back to the day they were both founded. In a new adventure that tests their agents' strength and wits to the limit, these two elite secret organizations band together to defeat a ruthless common enemy, in order to save the world, something that's becoming a bit of a habit for Eggsy... Written by Twentieth Century Fox

My opinion (Sorry for later but the movie is release the 11 October in France)
It's a mix of fabulous action, and humor. detonating. So British
With a super casting they are all excellent.
But it is perhaps a level below the first but it remains distracting because it remains a parody of spy film like James Bond ....