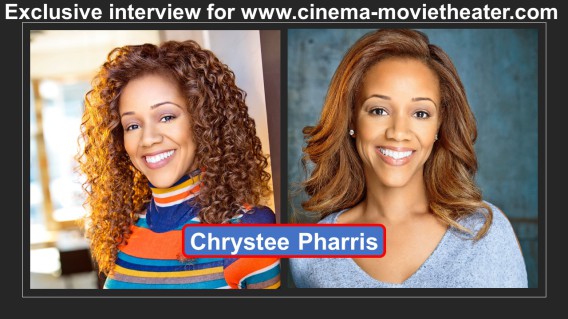 Hi Chrystee, I'm glad to do this interview

My name is Chrystee Pharris and I am an American Actress who loves to travel overseas! Ha! On a serious note, I love acting and knew what I wanted to be when I was 4 years old. And I was determined to make that dream come true.

I didn't let anyone discourage me about going after my dreams.

What interests you when you read a script ?

The journey of the character is most important to me.

Does it hit me emotionally, do I understand the journey, and is there a win or loss in the end, for the character.

I like seeing that a character has to make a choice that will alter the course of her life- whether it be for good or bad. It's what we go through in real life, right? It's not easy making life choices and I love playing characters that fight through their fears to get what they want.

It's not just dramas, it can be a funny script as well.

But what makes it funny is watching them fight through the decisions they have to make and failing but winning in the end. 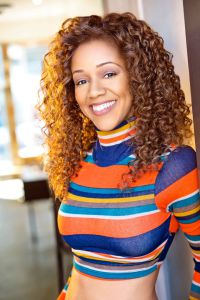 How do you prepare for your roles ?

I read the script as many times as I can because I find something new every time. Then I run the lines with friends as often as I can.

Then I work with a coach. My coach helps me dig into the characters psychological thoughts and behaviors.

Then I put it on its feet and do what we call "doings," to see if I really know the lines/thoughts. Because sometimes you think you know it, but as soon as you have to walk and talk or pick up a glass or get dressed in character, you forget them.

That lets you know you really don't know your lines. And what you don't want to have happen on set when you are working with the director is forget your lines when he gives you directions.

That will send a red flag to the whole crew. Your job is to know your lines and be able to take directions. If you can't do both of those... money is down the drain. And you might not work again.

Every character I've played was special, I have to admit.

They all were a part of me. From Pudy on Kenan and Kel to Simone on Passions, to Kyle on Scrubs- they all are special characters.

I think the two that were the most challenging were Faith from the faith based movie Steps of Faith (Over 10 million views) and Diandra from Craig Ross Jr's Monogamy.

These two characters go through an emotional roller coaster that really hit me to the core. We are in season 3 of Monogamy so I'm excited to see what season 4 will bring to the table. You can check them both out on Amazon Prime. 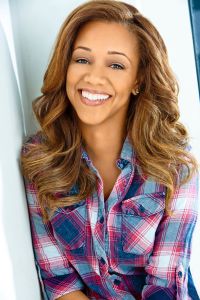 I knew I wanted to be an actress at 4 years old. I just knew it. There were no other options. I didn't have a back up plan.

I was determined to be an actress and my faith helped me achieve the dream.

You have to have faith and confidence. Faith to believe you will achieve your goals with focused work.

And confidence to show the people who hire you that you can do the job. Who wants to pay you $20,000 an episode if you are not confident.

I read on IMDb Pro that you were an actress in 9-1-1, Quantico and Castle.
These are 3 TV Series, that I like.
How was the filming with the actors / the actresses of these 3 TV series and what did you in your roles?

Quantico I did voiceover work so I didn't have the opportunity to actually work with the actors but I did do the sounds for their fight scenes! Lots of fun!

On 9-1-1, I played a mom who has a heartache during the Christmas holidays and on Castle I played a character that had an edge to her.

I didn't think I would get the Castle role! She was hard core and I never played characters that have an edge to them.

I usually play the virgin type character. The good girl. So when I went into the audition, to change it up- I had an attitude from the moment I walked in the door and I snapped at the casting director lol. She chuckled and said role the tape.

That is what the producer and director told me. 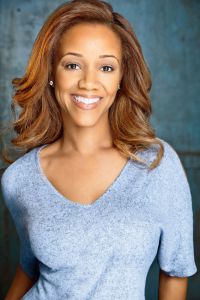 I also do a lot of voiceover work so I have a few projects I am working on now which is amazing.

I directed my first short called Aimee Victoria (it's in 20 film festivals at the moment and won 2 awards so far!)so I am looking forward to directing more tv, fim and musicals.

I am also learning how to sword fight. Never to late to learn.

Thank you for learning more about me and my journey. This acting business has its ups and downs.

But as long as you understand the business side of acting you can stay working all the time. You have to remember to trust your gut & know that there are no right answers.

You have to trust your instincts. I teach a business of acting class to beginner acting students. It's one of my joys.

Thank you very much for your interview Chrystee and I wish you all the best.

More information about  Chrystee on Instagram, on Linktree and on IMDb