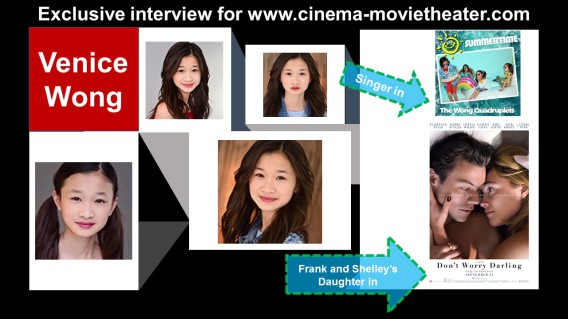 Hi Venice first, I'm very happy to do this interview about you.

Hello.  I’m very honored and excited about this interview and thank you very much for your time Jean Paul.

I am a Quadruplet, along with my 3 brothers, Harrison, Mason and Alexander. We are in a band called “The Wong Quadruplets” or “TWQ” and we’ve been performing onstage since we were 8 years old.  We are probably the only Quadruplet siblings in the world that are a pop rock band.

We were born 1 minute apart.  I play bass guitar and am the lead vocalist.  My brother Alexander is the lead guitarist, Harrison plays the keyboard and or key-tar; and my brother Mason plays the drums.

We play songs from the 80’s 90’s and today.  We play a variety of songs mostly classic rock, pop, soft rock. We produced our first single and music video at the age of 10 called “Summertime” and it’s available on all music platforms like Spotify, Apple Music, TikTok, YouTube.

Our second single “Hummingbird”  is produced, working on a music video and will be released soon.  This song is very special to me because In addition to playing a lead in the film, I also sang “Hummingbird” acapella in my very first short film called “The Runner”.

“The Runner" recently premiered and we are waiting to hear if the film is going to be accepted into the large film festivals, such as Cannes,& Sundance. I also perform in many musical theatre productions like “The Little Mermaid”  and work on voice overs for Studio’s such as Netflix.

My latest project is playing the voice of Diva in "L.O.L House of Surprises" season 2 which you can find on YouTube.  Season 1 is now on Netflix.

It’s so surreal because L.O.L. is my absolute favorite toy growing up and now I have the amazing opportunity to play the voice of one of the cutest characters, Diva.  Hoping I will have the opportunity to sing as Diva on the show as well.

What do you like in your character Frank and Shelley’s Daughter and in the storyline of Don't Worry Darling?

In this psychological thriller, I play Frank and Shelly’s  kid  in the film.

I was 10 years old when we did the filming.

Me and my film brother get to serve Olivia Wilde and Florence Pugh some drinks at the incredible poolside area by mom and dad’s house, which I thought was pretty cool! We actually got to bump into them and ask them if they wanted any drinks. We are introduced to the guests as “The Kids”.

We also get to mingle with the other actors, such as Harry Styles, which was Amazing!  Everybody was so nice and down to earth. We spent 2 days working on this one, very long, pivotal scene. I saw the trailer and  saw the scene of the pool party, but it went by so quickly, not sure if we were in the trailer.

Excited to see myself in the film, hopefully (you never know for certain, if your scene will wind up on the editing room floor.)

This was my very First Feature Film and it made me very excited for what is to come. I couldn’t wait to do it again :)

It all started when we were around 7 years old.  My parents asked us if we would like to learn any instruments just for fun.  Alexander chose the guitar, then Mason and Harrison (the identical twins) chose both drums.

Then Harrison had a change of heart and decided to learn the keyboards instead. As for me, I just love to sing!!   Then my mom jokingly said,  “I guess we can start a band”.  I started playing the bass guitar couple of years ago.

I realized  that this is the instrument for me.   Now the band is finally complete.  We have the lead guitarist, keys, bass guitar and drums, all under one roof.

We realized we were actually quite good and always know where to find each other lol. We now also work with a band instructor, song writer and musical director, our team is expanding! We are excited to continue to create our own original songs to produce and promote. In addition it’s very fun to play cover songs, which range from pop, ballads, mo town, classic rock, country.

We Love Performing and have probably performed about 15 times over the last few months alone.

We love to create songs with meanings or personal messages. When we released “Summertime” it was during Covid and after the lockdown. We felt like it rightly conveyed the way we were feeling and what many other kids were going through as well.

Our song “Hummingbird” “Fly free like a hummingbird, life is sweet, don’t blink just get lost in a blur. I want to swim where my heart feels pure. Cover me in petals from all over the world” I love this song because it describes How beautiful life can be.

Enjoy the moment, live in the present and appreciate the good things in life. To fly out there and see what the world has to offer.

Your first name is Venice as the Italian city. Is there a reason for this?

My mom said that Venice in Latin (just like Venus) means the goddess of beauty and love.   My mom said someday if she ever has a daughter, she would name her Venice.

So she kept that name in her mind hoping that she would have a daughter someday that she could name Venice.

Aside from that, my mom also fell in love with Venice, Italy.

She said it was one of the most beautiful place that she ever been to.

I would love to go there someday. We both think my name fits me :)

Do you have a preference between being an actress or a singer?

I love doing both!  It’s a different rush of excitement and energy  when I perform onstage with my brothers.

Love to hear the audience applause, it is similar to performing on the stage in musical theatre. It’s live and you receive instant gratification and validation, that people are liking your work.

When I am acting however, I get to play someone else. I find it thrilling to be a different character and see what it’s like to walk in their shoes. It is super cool to see myself on TV or on the big screen in film.

When I do Modeling, Voice over, Commercials, TV, Film or Performing live,

I feel incredibly grateful to my family & to my team who support me in everything I do. I know there are a lot of kids who do or wish they were getting some of the opportunities my brothers and I are getting and we are having so much fun and know how fortunate we are!!!!

The actor Benedict Wong, is he of your family?

What a shame I would have liked to have met Doctor Strange and his team :o)

What is your next challenge project?

I recently had a premiere showing of a short film called “The Runner” directed by Simon Balderas and I was one of the  lead actor’s in it.  Crossing my fingers that it will become a feature film.  We will find out by October.

The Shelter”.   And a week ago, I also filmed “Dhar Mann”, one of my favorite short stories on you tube that gives audience life lessons on each story.

It teaches you compassion, empathy, being appreciative of what you have in life and much much more. I think every child should watch it and learn a lot from it.

I am focusing on ways my brothers and I can give back to the community and reach out to help others.

You can also see us on Nickelodeon Face’s Music Party season 1.  My brothers and I performed “Summertime”.

They had us change some of the lyrics to suit the theme of the show. We had a segment all to ourselves. My brother Mason actually had 2 segments, as he played drums again and interacted with others in that segment.

We can also be seen performing and being interviewed by Tiffany Haddish on Kids Say the Darnedest Things on CBS TV.

We would like to thank everyone who is supporting our music and watching our shows! Our fans are the BEST!

Here’s our link tree which includes some of our projects

Thank you very much for your interview Venice. I wish you all the best for your further career of actress and singer with your 3 brothers

More information about Venice on IMDb, on The Wong Quadruplets,

Some words of Ivy her Artists Management

I was thinking my clients The Wong Quadruplets may be of interest to you. They are 12 years old one sister Venice, brothers Harrison, Mason & Alexander Wong Quadruplets. They have a band, Venice is lead singer, plays the bass, the boys play keyboard, drums

& guitar. Very talented, hard working kids who have performed live quite a lot, along with performing on a few National Network Programs.

In addition, the kids all do acting, VO, and print work.

A wonderful, kind, warm family, with a strong work ethic from Mom Maya and Dad Harry.  Mom Maya handles their music along with a band manager.

Maya coordinates all of their clothing/looks for their performances and handles dozens of logistics on any given week. The kids get a lot of auditions for commercials, TV, VO & Film, times 4 Lol.

Pls take a look at their Link tree attached and let me know if you have any interest. I would be happy to schedule a call to discuss as well. Their IG is wong_quadruplets.

Thank you so much!
Ivy
Artists Management