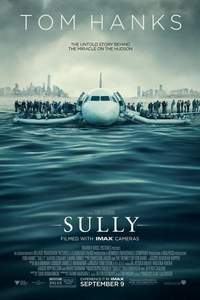 On Thursday, January 15th, 2009, the world witnessed the "Miracle on the Hudson" when Captain Chesley Sullenberger, nicknamed "Sully" & is portrayed by Tom Hanks glided his disabled plane onto the frigid waters of the Hudson River, saving the lives of all 155 aboard. However, even as Sully was being heralded by the public and the media for his unprecedented feat of aviation skill, an investigation was unfolding that threatened to destroy his reputation and his career. Written by Warner Bros.

To see other videos on this movie
SULLY - Now Playing

It is a catastrophe film, which will not be one.
Yet, we tremble with them because there is suspense while we know the story.
Sully was accused by his company of not having made the right decision by landing,
On the Hudson River in New York the images are very beautiful. All the actors are very good in this film,
And Tom Hanks is excellent.

But the scenario may be a bit confusing