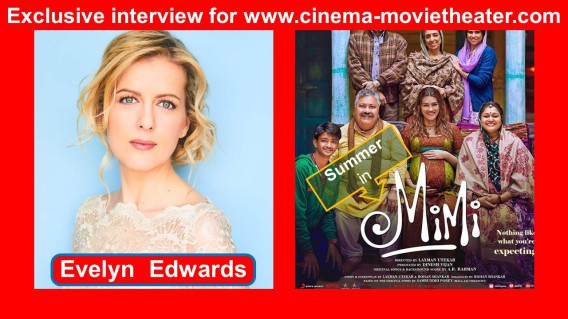 Hi Evelyn, I'm glad to do this interview

What could you tell us about Summer your character in Mimi which releases  the 30 July 2021 on Netflix and on Jio cinema ?
I have privilege of playing the character Summer who comes to India from America with her husband in the hopes of finding a way to live out her dream of becoming a mother.

The script is so beautifully written by Rohan Shankar and our fabulous director Laxman Utekar.

There is such a wonderful mixture of humor and heart, and each character goes through a tremendous personal journey and are ultimately changed by their experiences. This is the kind of storytelling that an actor lives for!

What did you like during this filming in India ?

India is such an amazing country!  It was my first time traveling there! I was so touched by the warmth and generosity of the people.

And ohhhh the food! The colors!  My first career was as a professional opera singer, so the musician in me love love loves the music!

One of my passions is history. The cities and locations we filmed in had some absolutely incredible architecture and fascinated histories that I was enraptured in learning about.

How was the filming with Deep Joshin, Kriti Sanon, Sai Tamhankar........... and with director Laxman Utekar ?

Every person associated with this film was so kind and incredibly talented. Laxman is one of the most supportive and collaborative directors I have ever worked with. He absolutely brought the best out in all of us!

The whole cast  and crew was so completely committed to telling the story to the best of their abilities. Being able to look in to the eyes of Pankaj, Kriti, Saie, Supriya, and Manoj was a gift. These are all actors that are absolutely at the top of their craft and it was an honor to act with them.

The bulk of the movie for my character was shot over a year, but this was elongated by the Covid Pandemic.

I am so thankful for all the roles I’ve been able to play. If you had have told me when I was a very little girl growing up in Las Vegas, Nevada that I would be in an Academy Award winning film or on some of the iconic television shows I’ve done, or a Bollywood film I wouldn’t have believed you!  I’ve played “good” characters and villains, each has taught me a lesson…

I always discover something about myself and the world we live in. This is the power of stories!

Thank you very much for your interview Evelyn and I wish you all the best.

More information about Evelyn on Instagram and on IMDb 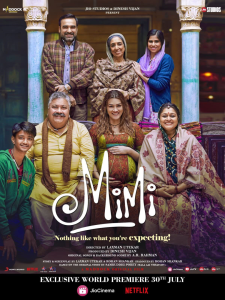