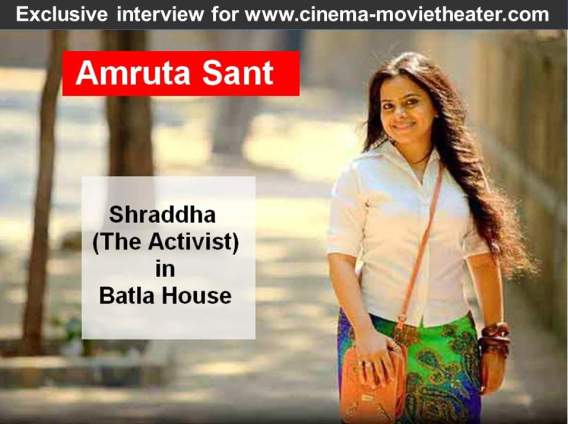 Hi Amruta, I'm very happy to do this interview about you.

I am glad to interview with you Jean-Paul.
My film 'The extraordinary journey of a fakir ' recently released on 21st June 2019, it is appreciated all over the world, it released worldwide more than
163 countries including Europe, Australia, United States, UK, Canada, Singapore, India and many countries.
Right now I am in Los Angeles meeting filmmakers, producers, managers and casting directors.
It's an extraordinary journey for me, I am so blessed to meet great people here who all guide you and are open to all the people all over the world irrespective of their race, religion, color, age, hight and so many other judgemental criterias. It feels so good when people look at you as a human being, as an actor,
as an artist without any judgments or preconceived notion.
I am on this beautiful journey and I am enjoying every bit of it, let's see where
it goes. Honestly I am learning so much and it's very precious for me.

What did you like about the storyline and your role in Batla House ?

Batla House encounter officially known as Operation Batla House, took place
on 19 September 2008, against Indian Mujahideen(IM) terrorists in Batla House locality in Jamia Nagar, Delhi, in which two terrorists, Atif Ameen and Mohammad Sajid, were killed while two other Mohammad Saif and Zeeshan, were arrested, while Ariz Khan managed to escape.
Encounter specialist and Delhi Police inspector Mohan Chand Sharma was martyred during the incident.
The encounter led to arrest of a number of local people, leading to widespread allegations and protests by political parties, civil society groups, activists, [1] especially teachers and students of the Jamia Millia Islamia University.

The story is based on this event.

How was the filming with co-stars and the diretor Nikkhil Advani?

- it was a great experience. I am glad to work with such professional and talented people.

My costars John Abraham, he is a super star I didn't know him personally before this film,but John was very kind he would sit talk and chill with all the coactors,
a gentleman and a great actor.
Mrunal Thakur is very talented and a very kind sweet lady to work with, she appreciated my work very much, she was very helpful and friendly too. Rajesh was were very good, supportive, kind and very professional.

It was a great experience to work with such talented actors.

I didn't know them personally.

When I started acting in theatre productions actively , specifically with Satyadev Dubey, Makarand Deshpandey, Sunil Shanbag, Divya Jagdale and many more renound theatre directors, I started enjoying the process,
felt true bliss, peace, happiness and joy in performing and I decided to be an actor and act till my last breath.