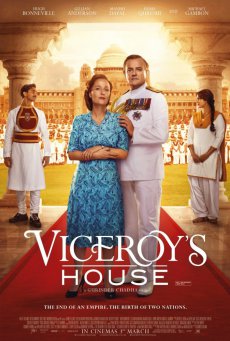 The final Viceroy of India, Lord Mountbatten, is tasked with overseeing the transition of British India to independence, but meets with conflict as different sides clash in the face of monumental change.

My opinion:
I am not a specialist in Indian history, but it is a country that fascinates me, I have Indian friends and a family of heart in India. I saw the Lagaan, Ganghi, and Viceroy's House movies today  on DVD .
After seeing the movie Viceroy's House, I give you my opinion on the independence of India.
I think Mahatma Gandhi was right, we should not divide India, India should remain one and indivisible. Because even today there are still tensions at the border between India and Pakistan. Can be a state with more autonomy but it remains in India, especially make a country cut in two with India in the middle it is not viable, moreover East Pakistan has become independent the March 26, 1991 under the name of Bangladesh.
And a religion should not be a country, but the conviction of everyone.
And I think he was right in the film it was the UN that should have made the borders between Pakistan and India.
But that would have been a great celebration for Indians independence but it turned to massacre by extremists of every religion.
Especially since you were all Indians but the problem with all the religions is that they think of being of a religion and after a country it is the reverse one is first of a country and after of a religion.
When we understand this then there will be no more wars and massacres as there are them in India in Ireland with the attacks of Protestants against Catholics etc. ?
One thing that bothers me in all religions is that no one has free will, parents have a religion to pass on to their children, etc. One should choose one's religion as one chooses
In the film they call the Mahatma Gandhi Papu is what it is Father in the sense Father of the Nation.
I watched it today in French version after I will watch it in English version but for me it's a very good movie.