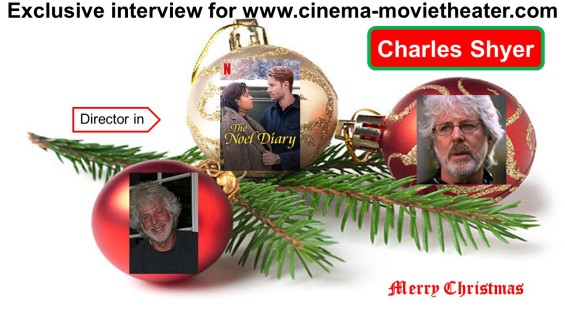 Hi  Charles, I'm glad to do this interview

My name is Charles Shyer and I’m the Co-Writer and Director of the new Netflix Film, The Noel Diary.

When and why did you decide to do this movie?

I liked the idea of doing a Christmas movie that was different than all the other Christmas movies… one that had a real story, strong characters and one that felt fresh in a sea of clichés.

This movie is based on the novel by Richard Paul Evans, but how long did it take to adapt the novel with Rebecca Connor, David Golden in movie?

Actually it was only Rebecca and me working on our script.

We read David’s version which stuck much closer to Rick’s novel.

We saw the movie version much differently – so we went about creating a new take on the story.

Could you tell us how you choose the actors / actresses for this movie ?

My ex-wife and writing partner, Nancy Meyers suggested Justin after reading our script.  She sent me a list of episodes from This Is Us to watch – and I was sold.  His range as an actor is incredible.

Barrett read for us and then I put her together with Justin and they seemed to click.  There was chemistry from the start – which is something – as a director – you pray for.

Essence Atkins has one scene and she knocks it out of the park. Brilliant actresss.

Shooting was the best experience I’ve ever had on a movie.

I was very well prepared… I storyboarded the whole movie.

We rehearsed with Rebecca present.

I basically had five actors – like a little theatre group of racehorses raring to hit the track.

How long did the filming and where is shooting ?

We shot the film in 27 days. Very tough shoot… in the dead of Summer in CT. with temperatures hovering around 100.

It’s kind of the only thing I think I could do well.

I was a terrible student – barely graduated high school…

But I had this weird confidence that I could succeed in the movie business.  Naïve I suppose.

You have nominated for * 1 Oscar Award. Another 2 wins & 2 nominations

Is there an award that you prefer more than the others ?

I’m thankful to be noticed at all.

I’m going to make a movie about my life when I was 17 years old.

It’s the most important film of my career.

Thank you very much for your interview Charles and I wish you all the best.

Very good Christmas movie.
The actors and actresses are very good too but a special mention to Justin Hartley and Barrett Doss.
The chemistry between the two actors makes for a great time.
The end is a little short, I would have liked to know more
To see