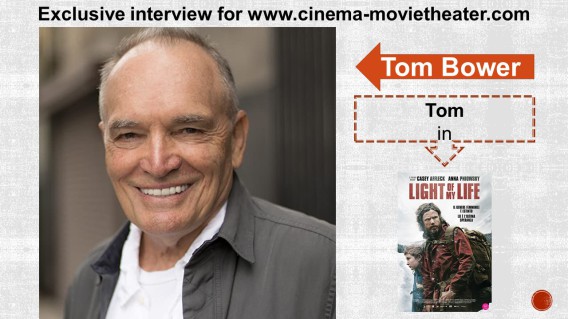 Hi Tom, I'm very happy to do this interview and I hope this finds you and yours safe and healthy.
Hello again Jean-Paul. Very happy to be with you.

Could you tell us about your character  Tom  in Light of My Life ?

Casey Affleck’s character is trying to get his daughter to safety.
There had been, strangely enough, a pandemic that wiped out almost all of the female population.
Thus, Casey, has disguised his daughter, played by Anna, as a young boy.
They had narrowly escaped a number of close calls, and Casey was trying to get them safely to another part of the country where Casey’s Grandfather had lived.
When he got to that house, it was occupied by me and two other men.
The house had been abandoned during the pandemic, and me and my friends took it over and restored it. Complete strangers.
I took them in and gave them shelter. However, I determined early on, that a Anna, was a girl, and not a boy.
I was concerned that Casey was hiding her identity for Ulterior motives.
He ultimately proved to me that he was the little girl’s father, and I agreed to help hide them, until a pack of crazed men came looking for her.
One of my companions had gone to town for supplies and gave Casey’s secret away.

There was a violent exchange while Casey and the little girl made their escape.
I was shot and killed, but Casey and Anna, got away.

I saw the trailer and I think,  it is an action-packed  and Fast – paced  as movie. What did you like when you read the script  ?

It wasn’t the action, what little there was of that.

I had worked with Casey on two other films, and had become good friends.

He offered the role to me. I didn’t have to audition or prove anything.
I knew that Casey had children who he was very close to, and he wrote LIGHT OF MY LIFE; with his kids in mind. I found that to be very touching, and I love Casey’s acting.

So, it was a ‘no brainer,’ for me to accept the job, as offered.

How was the filming with Anna Pniowsky, Casey Affleck, Elisabeth Moss.......and the director Casey Affleck ;o) ?

I didn’t get to work with Elisabeth Moss, but all my scenes were with Casey, or

a Anna, or both. I was very impressed with a Anna, who hadn’t had a great deal of experience, but her instincts were right on. Casey’s direction, like his acting, is highly sensitive.

He doesn’t dictate as many directors do. Casey, is more inclined to question what your scene and what your character is about in the scene.

That forces you to look for more answers rather than having direction dictated.

It becomes more fulfilling as you play out the action of the scene.

It’s part of the Method, I subscribe to as a member of the Actors Studio, and

Lee Strasberg, and as a student of a Sandy Meisner, though Casey doesn’t  subscribe to any teacher’s method that I know of. He just has a way of working that I can understand and follow through on my own.

Did you perform with your co-stars before ?
Yes. I had worked with Casey on THE KILLER INSIDE ME. We shot that film in a Oklahoma under the direction of Michael Winterbottom.

Another great director in my estimation.

The scenes we worked on together, were very intimate. Mostly of a Father and Son kind of relationship. I had been a fan of Casey’s acting since seeing him in THE ASSASSINATION OF JESSE JAMES, BY THE COWARD ROBERT FORD. Casey was nominated for an Academy Award in the Lead Actor category.

I also worked on OUT OF THE FURNACE; that my close friend, Scott Cooper directed.

I didn’t have any scenes with Casey, but I saw a lot of him while we were on location in Pittsburgh. I was then blown away by Casey’s Academy Award winning performance in MANCHESTER BY THE SEA. So, it was a great privilege to be working in the first performance Casey did after winning the Oscar, and he was directing from a script that he had written. The supporting cast and the location were spectacular.

You perfom in the movie Fully Realized Humans which realese the 8th August 2020 in USA. Could you tell us more about your role and the storyline of this movie ?

This was a total surprise. I worked for one day, the entire day, in a very intense, largely improvised situation with four other actors of immense talents.

This was something we did a little over a year ago, and then it was forgotten. Next thing

I knew, we had been chosen as one of ten films for  Domestic Narrative  Feature Films, in Competition, for the Tribeca Film Festival.I mean, filmmakers break their necks to get into this festival. ‘Many are called, few are chosen.’

It was so exciting that my wife and I made arrangements to be in New York City for all three screenings.

We had our plane tickets, our hotel reservation, tickets for two Broadway shows, one of which was to see our friend Ed Harris in TO KILL A MOCKINGBIRD,

but the festival, in competition, one of ten such films; such a big deal.

Not to be. Covid-19 knocked everything out, and believe it or not, your notation that the film is to be released on August 11th, is the first I’ve heard of it. Amazing! That, along with the amazing success of yet a third film; SENIOR LOVE TRIANGLE; released today August 4th On Demand; with reviews like

I’ve never seen before, almost too much excitement in the matter of a few weeks.

Only sad thing about it is that we didn’t get to experience this Trifecta with the collective murmur of a live audience in Theaters.

Great numbers of people will see the combination

of the three films, but there is nothing like the heart beat of a live audience.

With less than a month until the birth of their first child, Jackie and Elliot embark on a madcap odyssey of self-discovery in attempt to rid themselves of the inherited dysfunction of their own upbringings.
I play the Father of the Father to be. My wife is played by the wonderful actress Beth Grant. The lead character is played by Josh Leonard of THE BLAIR WITCH PROJECT.

I know it is difficult to predict for movies, TV series....... for the moment with the Covid-19, but what is your next challenge ?

I have yet a fourth project waiting to be released, and it unlike the three projects listed above, was made for TV. It’s called MADE FOR LOVE; and it was the pilot episode for a ‘sold on the air series to be shown on the new network HBO MAX.

I don’t know when this will air, but it should be exciting.

It stars Ray Ramano and Christine Milioti. My role could be recurring, but there’s no guarantee of that. It’s a possibility that

I hope for. I’m committed to do a major role in the feature film UNDAUNTED;

whose dramatic escape from slavery-after spending years in her grandmother's crawl space hiding from her sexually abusive master--prompted her to write a memoir (Incidents in the Life of a Slave Girl) of her struggles, sexual assault, and fierce desire for freedom that remains the most-read woman's slave narrative of all time. 12 Years A Slave meets #MeToo. Written by Daniel Blake Smith

Thank you for this opportunity to connect with French audiences. The viewing audience truly is global and ever expanding. We, the artist’s have to do everything in our power to communicate with people all over the world. I hope we might meet again some day in person. 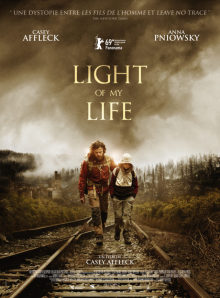