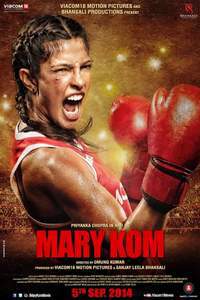 A chronicle of the life of Indian boxer Mary Kom, who went through several hardships before audaciously accomplishing her ultimate dream.

To see other viseos about this movie
Mary Kom | Priyanka Chopra

My opinion and my rating :

During the film, she is Mary Kom. This is a film without taking time out, you never boredom, he recounts the extraordinary destiny of a woman outside the norm.

There are also beautiful views of India.

Really a good movie, I liked to do

For the film's subject, the interpretation of Priyanka who has done a remarkable job training for Mary Kom and other actors and actresses who are great too.