Release in USA the 29 January 2016
With my opinion and my mark, also give your opinion and your mark. 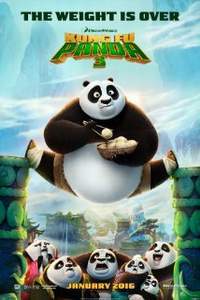 When Po's long-lost panda father suddenly reappears, the reunited duo travels to a secret panda paradise to meet scores of hilarious new panda characters. But when the supernatural villain Kai begins to sweep across China defeating all the kung fu masters, Po must do the impossible-learn to train a village full of his fun-loving, clumsy brethren to become the ultimate band of Kung Fu Pandas. Written by 20th Century Fox

The new Kung Fu Panda, Po martial arts master take us through beautiful graphics in the heart of ancient China and the world of spirits.
But this film also tells the problem when a person finds his father over his adoptive father.

A beautiful film and in 3D is really a plus