Release in USA 26 August 2015
With my opinion and my mark, also give your opinion and your mark. 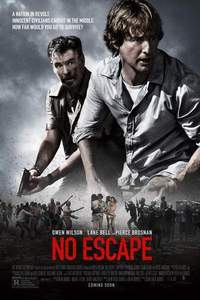 In their new overseas home, an American family soon finds themselves caught in the middle of a coup, and they frantically look for a safe escape in an environment where foreigners are being immediately executed.

My opinion and my rating :

A very good well chosen cast (Pierce Brosman, Lake Bell, Owen Wilson ...), director John Erick Dowdle his music and his plans are really grasping we pray with them in action. on some level we are between the film and the documentary.

It's a breathless thriler with very good actors

See but attention to sensitive souls as there are violent scenes.