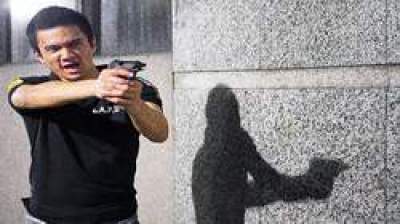 Hello Amir, can you introduce visitors to cinema-movietheater.com?

My name is Amir Rahim, Im an actor from Malaysia and I have been residing in in Los Angeles for the past two years.
I have been acting for the past 3 years. I've done several independent and short films.

You discovered your passion for cinema at 16, in what occasion?
I discovered my passion by accident. When I was 16, I was just going about my life in school like any other kids. Then one day, a drama teacher came in to my class and asked the whole class if anyone wants to participate in a school play. At that time I didn't know what a play was, so I was curious enough to volunteer and participate. Ever since I had my first taste of theatre, thats when I knew I wanted to be an actor.

Why did you choose to be an actor ?
I chose to be an actor because I'm very passionate about it. Acting is an escapism for me. It allows me to be in someone else's shoe for a brief moment when Im doing a film or a play and its really fun playing other characters and discovering new things about life and people when I'm acting.

What kind of short film you have shot in Melbourne?
-When I was in Melbourne I did very little acting because I was studying filmmaking. I took a Bachelors degree in Film and Digital Media. I did manage to do one short film called '16:00' directed by Todd Farley. I played a small role in that film. You can check out more info about that film on my IMDB page  and his web site Amir Rahim
You received a Bachelors Degree in Film & Digital Media, do you get other award since?
I haven't received any other award since I got my Bachelors degree.
I did however worked on a few film projects as a crew member.
In late 2013 you Moved to Los Angeles, California and Pursued His Masters Degree purpose.

Did you do other theater or movies in USA?
I did several theatre and films when I was in United States. I did a lot of short plays, it was mostly for my college theatre project, but it had a lot of crowd support. I also did a lot of short films and independent film. The latest film that I did, and very proud of is called 'Menunggu (waiting)'.
I play a lead role in this film. "Menunggu" chronicles two separate events in the life of a Malay man dealing with heartbreak, existentialism and ambition through a melancholic panorama in Los Angeles. It will be submitted to several film festivals such as Cannes Film festival, LA International Film Festival awards and many more. You can check out the Facebook page for that film to find out more info

What is your next challenge?
My next challenge is to get a role in a feature film whether its a big budget or independent. Thats what every actor wants to do eventually,
to showcase their talent on the big screen. I have been in touch with some big time film producers in Malaysia to work on a feature film.
So hopefully Ill get something. I want to do at least 2 feature films this year.

Do you wish add something?
For those who have big dreams and ambitions, keep working hard and never give up. Success doesn't come over night, it takes time to achieve what you want. As Steve Jobs says, "Your work is going to fill a large part of your life, and the only way to be truly satisfied is to do what you believe is great work. The only way to do great work is to love what your do. If you haven't found it, keep looking, don't settle. As with all matters of heart, you'll know when you find it."
Facebook Amir Rahim Acteur / réalisateur

Thank you very much for this interview Amir, and i wish you the best, see you soon.