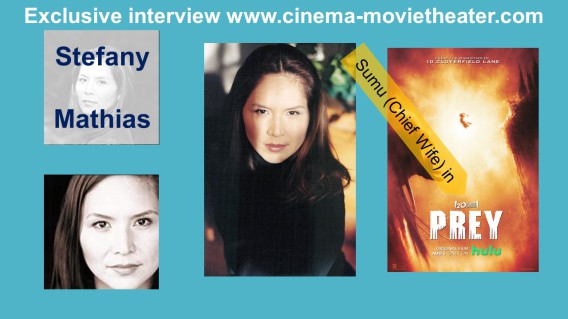 Hi Stefany, first, I'm very happy to do this interview about you

Can you introduce yourself to the visitors of cinema-movietheater.com ?
Hi! I'm Stefany Mathias. I am a member of the Squamish Nation. My father was Squamish and my mother is from the Okanagan Nation here in British Columbia, Canada.

What do you like in your character Sumu (Chief Wife) and in the script of Prey?
What I love about Sumu is her inner strength and leadership in her family and village. She is a strong leader in her own right.

She stands beside her husband not behind him, her husband consults with her and discusses the matters of the tribe. Unfortunately, those scenes were cut so the movie could focus on Naru and Tabee, which is where the focus should be, but that is the way it was in the Comanche culture and in many Indigenous cultures actually.

Women were traditionally active leaders in their respective communities.

How did you get this role?
I auditioned with a self-tape, which has been pretty standard since the pandemic began. My agent sent me the breakdown and the sides (which are the scenes we audition with).

My husband Tony records and reads the other lines for me for most of my self-tape auditions. I read for both Sumu and Aruka and I booked Sumu.

How did you prepare for your roles?
I got the script shortly after I booked the role. I read the script a couple of times. In the original script, I had a couple of scenes with dialogue which, unfortunately, were cut for story focus and time purposes.

I could work with the dialect coach and Jhane Myers, the producer and Comanche consultant.

We learned the dialogue in Comanche and English. Once we started shooting we mostly used English with Comanche sprinkled in here and there.

I talked with Jhane a lot about the role of a chief's wife during the period the movie is set in.

She was fantastic, so generous with her time and she has so much knowledge to share. She is really involved with her tribe and culture.

A wealth of knowledge and a powerhouse of a producer.

How is the shooting with your co-stars and with the director Dan Trachtenberg?
I feel extremely fortunate to have had the opportunity to work with the cast and crew of this film. Everyone was great to work with, professional, open, and friendly.

That was my experience.  Amber (Midthunder) and Dekota (Beavers) are humble, kind, and professional as were the rest of the cast.

There were no divas or problem people in the cast, it was a really supportive and professional set to work on.
Working with Dan was a fantastic experience. He had a clear vision of what he wanted making this movie. He is a big fan of Preditor the original 1987 film with Arnold Schwarzenegger and had a seed of an idea for this film for years.

I think they achieved that here in this film and their commitment to that that shines through spectacularly in every detail. If a piece of jewelry or wardrobe wasn't exactly right, Jhane would take it back to her hotel room and fix it herself, if that's not authentic, I don't know what is.
Dan is a dream to work with, he gives a clear direction to actors and then steps back and lets you do your work.

I really enjoyed working with him, he was always good-natured and easy-going no matter what was going on I'm sure there were challenges that we as the cast weren't privy to and yet he was always calm, cool, and collected with his clear vision intact which is always keeps the set in a good place for creating and doing the best job possible.

When you have a director like that a successful film like Prey is possible. With Dan at the helm, you could tell it was going to come out as a successful film and a great working experience because all you have to worry about is doing your own job well so that's what we all were able to do.

During my dad's time on the Squamish Nation Council, he was very politically active for basically all of his adult life. He dedicated much time and effort towards the goal of having Indigenous rights recognized, specific issues involving treaties, and interim measures on fisheries, health and education. In 1985, he was appointed to a federal task force reviewing Ottawa's Comprehensive Land Claims Policy.

In 1990 and 1991, he served as a member of the tripartite British Columbia Claims Task Force, which resulted in the creation of the independent BC Treaty Commission. In 1992, he was appointed a national co-chair of the Assembly of First Nations Constitutional Working Group.

Through these organizations and positions, he continued to work for Indigenous rights and land claims negotiating with the Canadian government until his passing in 2000. Since then, The Squamish Nation has been finding its footing and direction building on what my father achieved during his lifetime.

Since European colonization and the Indian Reserves
Has life on the reserves changed today for Squamish people?
A lot has changed since colonization for sure, but it has been a very very slow change and there is still a long way to go.

There is still a lot of healing to do from the damages of colonization, there has been generational trauma and damage that was done through colonization and the mistreatment and attempted geniscide that happened during that time. There is still much to heal from and repair, but I believe that we are on the right track and with time there will be healing and success for the Squamish People and all the other Indigenous people across North America. We are still. here and we are growing stronger as time passes.

What is your next challenge/project?
I'm about to go and work on a couple of different projects in September. On is a docu-series about the incredible leader Chief Sitting Bull where I will play his mother in flashback reenactments.

I am also continuing to audition for television and feature films through my reps. Things are getting busy and moving fast which is really exciting.

I'm excited to see what comes next, it's always an adventure!

Do you wish to add something?
I'm excited to see this Indigenous rise that's happening lately, using Prey as an example, having the Comanche people as the heroes and showing them as people with families and human connection, telling this story from their perspective, I think is a huge step in the right direction.

TV shows like Rez Dogs, Dark Winds, and Rutherford Falls are also contributing in a big way to this beautiful rise of Indigenous culture, voice, and content.

The success of these projects proves that audiences are interested in Indigenous stories and learning about our cultures of course, but more than that audiences can relate to us as people.

The more we get Indigenous people on the big and small screens the more the general public will relate to us and see us as a part of the society, of the world. We are no longer invisible and we are no longer silenced.

We are active members of human society with vibrant stories, knowledge, and information to share with the world. It's an exciting time and I'm overjoyed to be participating in it. I've been in this Industry since the mid-90s and there were simply not as many opportunities for Indigenous people like there are now.

I would have killed to have a part like Naru when I was in my 20s, but it just didn't exist. I have been bashing the glass ceiling as an Indigenous woman since I began as an actor.

As soon as I got an agent when I graduated with my Theatre degree I told her I wanted to audition for prest day roles, like lawyers, doctors/nurses, and regular people type roles and she submitted me and fought for me but many many productions would just respond with "we're not going ethnic with this role" and the doors were constantly shutting unless it was specifically an Indigenous role.

Even then, they would often give to an actor who was not Indigenous at all.

For example, I auditioned for the role of Starfire in Pathfinder (2007) and the role went to Moon Bloodgood who is a fine actress, I've never met her and have nothing against her as a person or actor, but she is white and Korean, not Indigenous at all.

When I was on set to play the role I did get which was significantly smaller and ended up being more of a featured extra role, dozens of people thought I actually was Moon. People were coming up to me and saying good morning as though they knew me, I thought it was such a friendly set until someone finally looked closer and said they thought I was Moon.

Not gonna lie, it stung a bit to know that we looked so much alike but they cast her as the Indigenous lead instead of me or any of the other capable and talented Indigenous actresses out there at the time.

I'm sure it was largely due to experience and length of the list on our resumes but we were never given any opportunities to build experience and our resumes so how could we compete in that way? It did make me stronger and work harder though and I'm grateful for that. I never gave up, it took a while, but I'm still here and the changes are happening and I think it will continue, there's no going back.

Can't put the genie back in the bottle. The door is open and we are ready, we've been preparing, getting better at what we do, and honing our craft.

There's no stopping us now, we're coming, there are more Indigenous creative storytellers, actors, writers, filmmakers, and producers than ever before.

Watch for us, you don't want to miss this :) 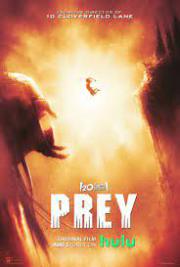