Exclusive interview with Vincent Matile, French Actor based in China 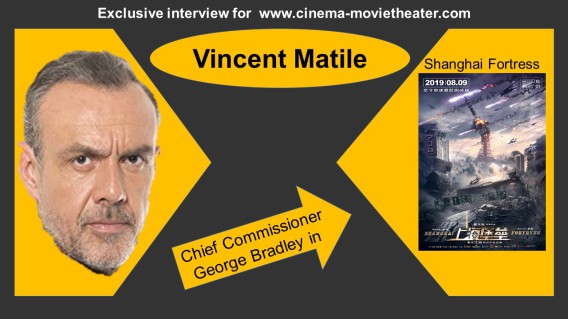 Hi Vincent, I'm very glad to do this interview about you.

Hello Jean-Paul, that is a shared pleasure, thank you for taking the time to interview me.

What did you like about the storyline and your role in Shanghai Fortress ?

When I was asked to do this role, I sincerely had no idea about anything except the fact it was a theater film. I received the script in English with my name in watermark on it, which was very surprising.
To keep everything secret, the production only gave me my scenes and nothing else, so I had no idea about the content of the film.
Once received my lines, I made a few research and was excited to appear in a science-fiction movie because so far I had not many opportunities to perform in films (mostly in Tv Series) and even less in a science-fiction one.
Concerning the role, there was no surprise, it was a person of authority,
the kind of role I am often cast in.

How was the filming with co-stars and the diretor Hua-Tao Teng ?

The filming was an unforgettable experience, till now one of the best I ever had. The team was an international mix with the local Chinese team, the Hong Kong team, people from Los Angeles and an awesome Australian DOP I had a nice conversation with, Geoffrey Simpson.
The director Hua-Tao Teng was also very kind and approachable person. He was assisted by Pei Pei Lin, a very professional first AD. To be honest, it was the first time ever I was directed in English (and not in Chinese) so I learnt a lot on set about English technical terms.
It was funny on set because I was sometime asking instructions in Chinese instead of English. Three languages were spoken, English, Mandarin and Cantonese.
I had no scenes with the main-actor Lu Han but one scene with the main actress Shu Qi (no direct interaction with here by the way) but I had no contact with her, she wasn't accessible and just on set while we were shooting. My scenes were with Godfrey Gao and Liang Shi.
Godfrey was very concentrated on his performance while we were shooting,  but contact was good with him and my relation with Liang Shi was very nice.
I discovered the second shooting day we had together that his french was perfect and we took time to exchange a little bit more. He told me about his carreer in France and we still exchange sometimes on Wechat.

I knew about Lu Han, who is one of the most famous figures in China, a very popular singer and a very popular face that appears in many advertisement paperboards all over China for different brands.
I was aware as well of Shu Qi background, everybody know her in China for a long time.

When and why did you choose to be an actor in China ?

I was introduced in 2014 to a local agent here in Hangzhou and had my first opportunity to appear in a TV Series.
I enjoyed the experience very much. Since then, I've made my way in this industry and have played more than seventy roles and improved my craft along the way.
So basically, we cannot really talk about a choice but more about a match between this activity and my aspirations. I really enjoy every second I spend on set and acquire more and more experience role after role.

And what do you like in the culture of this country?

I like its  depth. In a sense, China and France are very comparable because
we are both very old and singular nation.
Not much civilization has such a long history in the world and that makes the culture and personality deep. Learning China is an endless quest, you learn something new every single day.

You who know China well, what is the biggest cultural difference between this country and France?

Both our countries have lots of codes, unspoken rules and a way make things. Our people are far and close at the same time for same reason I explained in the preceding question.
There's as much paradox here than we have in France. But one thing is certain, in China everything is still possible, you can feel the strength of this country, which still has a lot to do, which is not afraid of anything and which gives people a second chance without judging them.

I have been shooting a lot in 2018 and 2019 and have a role to finish this month. After that, I will have a little rest. Then, my next goal is to get more roles in movies, especially theater movies.
Mostly working on the series is a little stressful and as I want to continue acting in Chinese language. Movies are more adapted to my "learning lines" capacity.
I am also writing a french feature film, a contemporary story.
The pitch, synopsis and story are already achieved, I still have a lot to do on my "séquencier" and "continuité dialoguée" but the flow is clear. I already see the entire film in my head, now...... ah ah!

Yes, I would like to encourage every in the making actors, confirmed actors who struggle to find roles to consider coming and having a look at China with new eyes.
The cinema industry is really booming here and there are some roles for everybody.

Thank you very much for your interview Vincent and I wish you the best for your future.

More information about Vincent on his website on IMDb, on  Weibo  and on Mayoan