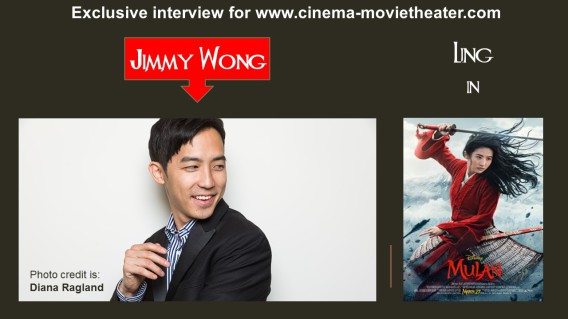 Hi Jimmy, I'm so happy to be doing this interview and I hope this finds you and yours safe and healthy.

Could you tell us about your character Ling in Mulan ?
My character Ling bears a lot of similarities to his original animated version – he's still a romantic at heart and a bit clumsy too.

In the new Mulan , he's also one of the soldiers who is constantly confronted with the gravitas of the situation in front of him and is a bit more somber than the others when it comes to war.
Each of the soldiers alongside Mulan has a really unique personality, and it's a lot of fun seeing each of them bounce off each other in their own separate ways !

What did you like about the script when you read it ?
I loved how it took the original film and adapted into something that will be innately familiar, but completely new to audiences.

The second time I read it, I looked at it from the perspective of someone who had never seen the original animated movie before, and I was really glad to feel that the script was just as strong.

There are so many vibrant characters, moments, and scenes that leaped
right off the page and it was an absolute delight seeing them get realized on set. The scale of this movie is huge, but the script kept the human elements just as personal and as real as the story needs to be.

How was filming with Yifei Liu (Mulan) and the director Niki Caro ?
I can't say enough kind things about Yifei.

She is deeply committed to her profession and was a consummate professional day in and day out on set.

Her schedule was absolutely rigorous compared to ours – being the lead meant that she was working on set nearly every single day with very few breaks.

And there's so much more that goes into her role as an actor – she spent months more than us training physically and mentally for the shoot to come. She also would have to arrive to set 3-5  hours earlier every single day to make sure that her hair and makeup were perfect for the scenes ahead – and some days she would go through 2 or 3 costume and makeup changes.

Making her look convincing as a man in the army is no easy task, and it was a ton of time in the chair every day to get ready. Yifei was spectacular in her patience, calm and cool attitude, and graciousness towards everyone who was a part of the cast and crew.
Working with Niki was a personal dream come true. Ever since I caught a screening of Whale Rider at the Seattle International Film Festival as a young boy, I could always tell that she was ahead of the curve in so many ways as a storyteller and director.

Niki is focused, driven, and so precise when it comes to her vision.
She spent so many years before a single second of movie was filmed doing

the requisite studying, research, and global search for her cast and crew.
She worked so closely with Yifei nearly every day on set, and the result of that theatrical work is astounding. Yifei's performance in this film is something to marvel at, especially thanks to the connection she shared with Niki.

There's a lot to be said about her place in history as well as a director of a film of this scale and magnitude, and even with all this pressure, I distinctly remember that every time she talked to us as actors, she was 100% present and ready to help us get to exactly where we needed to be.
The result is a movie that is as finely crafted from a cinematography standpoint (shoutouts to Mandy Walker, Director of Photography) to an acting and storytelling standpoint. Niki accomplished something amazing with
this film, and I can't wait for people to see just how special it is.

Had you performed with your co-stars before ?
I hadn't! I had seen their work obviously around in the past, and secretly was a fan of Jason Scott Lee for many years.

It was an honor to be able to share the same room with a lot of these storied actors, and I learned so much from their collective wisdom and stories. Spending nights hanging out with Ron Yuan and getting to hear about Hollywood from a distinctly Asian perspective was something
that I think all the younger actors in the film will cherish forever.

Did you see the 1998 classic Disney animated film before the filming of this movie ?
Absolutely ! It's hard to find someone who hasn't !

You wrote a parody song/music video “The Chinese Virus” -- why did you write this song ? The world is in a very difficult place these days. There is a collective suffering and pain that I can feel across every nation.

Yes, we can say that we are all "in this together," but there are so many of us out there who are struggling even more than before.
So many jobs have been lost, many bills are still looming over heads, and
I can't even bear to imagine how many victims of domestic abuse are in an  even worse position now that stay-at-home policies are being enforced. Through all of this, there has been an increasing amount of finger pointing to someone people can blame as "the reason" why this is happening. In my song,
I spent a lot of it talking about "scapegoating", which is the idea that  instead of shouldering responsibility or blaming ourselves, we lay the blame on someone or something else.
The use of the term "Chinese Virus" has had this effect on Asians around the world. Words have power, and it is recommended by our scientists and health organizations to avoid region-specific terms for this exact reason.
We've seen a drastic uptick in attacks on Asians around the world, from verbal harassment to outright physical violent attacks. In order to stop this from  happening, we need to stop looking at Asians as a "Chinese virus", but instead understand that diseases have no allegiances to any country or place.

They are something that affects every single human. The more time we spend pointing fingers at each other, the less time we can spend working together on how we will cross this hurdle as a human race.

On a personal level, my parents immigrated to this country in search of a new life over 30 years ago. I fear for their safety and wellbeing in general, but now seeing these awful racist attacks on Asians on the rise across the  world, I am even more scared for them when they go out in public to shop for groceries and do other necessary things.

No one should have to live with this fear, especially in a country founded on the  principle that we are all created equal. I hope my song can go a little ways towards promoting better awareness of the issue and helps keep us focused as fellow human beings.

You made a new cookbook THE FEAST OF FICTION KITCHEN with Ashley Adams (available on April 28th via Countryman Press). Could you tell us about this cookbook ? I'm so excited to release our very first cookbook. Feast of Fiction started as a weekly cooking show on YouTube back in 2011, and we've been recreating fictional recipes from your favorite movies, videogames, cartoons, books, and more for the past 9 years.

We've been planning to make a cookbook for many years now but wanted to make sure it was as perfect as what we saw in our heads.

We're so proud of what we created – the book has 55 amazing recipes accompanied by full size photographs that really elevate the book to another level. We tested these recipes for months to make sure we were creating the simplest and most elegant versions of our creations ever.

We feel ​like the book has universal appeal – anyone can pick this up and find something inside that inspires them or puts a smile on their face.

After all, we are huge fans of the fictional properties we create the recipes from too. The Feast of Fiction Kitchen is a great gift for yourself or a loved one, and we know how much time people are now spending at home cooking, so we'd love for you to check the book out and spice up your daily creations too ! 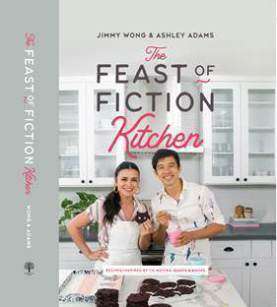 What is your next challenge/project ? There are always a few things cooking on the fire, but the one I'm most excited about right now is Wish Dragon , an upcoming animated film by Sony Pictures Animation, featuring the voice talents of myself, John Cho, Constance Wu, and more.

It's this beautiful tale of a young kid in modern-day Shanghai who stumbles upon a magical teapot, and inside it is a Wish Dragon that will grant him  three wishes.

It's produced by Oscar Award Winner Aron Warner and directed by the super talented Chris Appelhans. Unfortunately, due to the worldly events, I am not even close to qualified to tell you when the film might release.

All I can ask is please keep it on your radars – the story and the animation are all top-notch. I truly believe it's going to be a movie that people remember for a long time.

Would you like to add anything else ? Just wishing everyone a safe and calm environment wherever they are in the world. If you are on the frontlines fighting for the lives of others, I commend you and thank you deeply for your work.

You are heroes to us all. If you are in a position where things might not be safe, and you are a victim of abuse in any way, I pray you can use the resources around you to reach out to someone who can help.

I pray for your safety and believe in your ability to make things better in any way. If you are lucky enough to be in a financial situation where the worldly situation has not negatively affected you in any significant way, I hope you can use this time to use your position of privilege in a way that heals the world in some way. We clearly could use the help.

Thank you very much for your interview Jimmy, I wish you the best 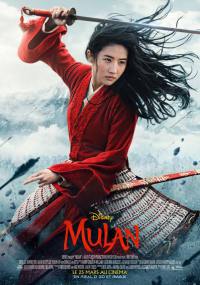