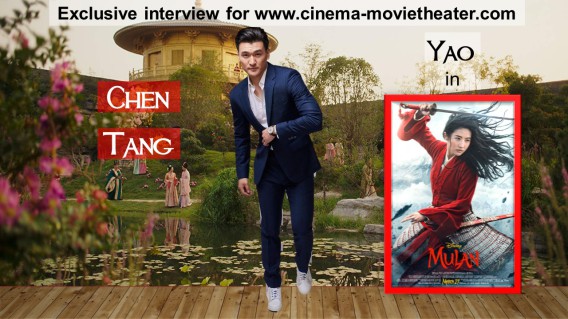 Hi Chen, I'm very happy to do this interview.

Could you tell us about your character Yao in Mulan ?

Like in the cartoon, Yao is the tough guy of the group.  He wants to be the manliest, toughest, biggest guy in the whole army.

But he finds out during the film that being a real man means taking care of the people you care about.  I wanted to make my Yao a younger version of the cartoon character, while also being authentic to the real Chinese culture that I am from.

I loved how emotionally real and moving it was.

The writers gave so much to us in terms of our relationships between each character, and makes the war feel so real.

How was the filming with Yifei Liu (Mulan)........and the director Niki Caro ?

Yifei was such a perfect fit for this role.  I was so impressed by her discipline, her work ethic, and her kindness. Most importantly, I was impressed with how tough this small girl was.

She did so many of her own stunts, and there was one time I remember when she hurt her knee sliding across a wall.

She hit a wooden beam as she was dragged across a wall doing a stunt scene.   It was so loud when she hit it.  We were so afraid she would be injured.

I looked over at her after, sitting and putting ice on her knee.

Then I saw her push down her tears, focus, and get back up and limp to finish the stunt.  It was at that time when everybody looked at her and said to ourselves, “Wow, she IS Mulan!  Strong. A true leader.”

Working with Niki Caro was such a pleasure.  She is so caring and creative, and she has such a vision.  It felt like she was our Big Mother.  That’s how she took care of us and the project.

I had done a film previously with Tzi Ma (who plays Mulan’s father).  Everyone else was the first time I worked with them.

Did you see the 1998 classic Disney animated film before the filming of this movie ?

Of course !  It’s one of my favorites, because it is a story we Chinese grew up hearing.

It meant very much to me to see a version of our legend and culture on the screen.

Would you like to do other movies franchises at Marvel / Disney ?

I would love the opportunity if they would have me. Of course !   Nobody can create a whole world quite like Disney.

I didn’t start acting, and never thought about acting growing up.

I thought I would join the military, and I didn’t know what I wanted to do.

I decided to go to University, and I took an acting class there.

The teacher thought I was pretty good, and seemed to enjoy it, and asked me

to audition for some of the school’s shows.

I ended up doing a musical, and I had so much fun.

I remember thinking, “people actually get paid for having this much fun ?”

I chose to become a professional actor soon after that.

I sponsor a  child in India with France Parrainages and I read that you have supported the Cambodian Children’s Fund and St. Jude Children’s Research Hospital for numerous years. and hopes to lend his voice to the preservation of nature and the oceans.

Can you say us more on these 2 charities ?

I took a trip to Cambodia several years back, and I was shocked how much the country has suffered from years of civil war and poverty.

There were so many children on the streets selling things to make money, and begging for help.

I knew that almost every single person had personally lost a loved one in the war.  Coming from Asia myself, and knowing what it feels like to have very little, I wanted to help these children.

I came back and looked up charities, and I found the Cambodian Children’s Fund.   It was started by former Hollywood producer Scott Neeson, who gave up everything in his life to go there and start this charity.

St. Jude’s Children’s Research Hospital is based in Memphis, Tennessee.

It is also the hospital my parents worked at when we immigrated to the United States, and who helped us get green cards to stay.  It is one of the leading research hospitals  in the world.

It specializes in cancer and childhood disease research, and also has a hospital section that cares for the patients.  The policy is, if you are a patient, the hospital will provide care and housing to the patient and the family, completely free of charge.

I want to just keep working hard on being the best actor I can be.

I love my job !  And I want to play a wonderful role in a great drama that makes me change my appearance and behavior completely.

We can’t wait for the world to see our film Mulan.   We hope you truly enjoy it, this new chapter in the legend.

Also, later in the year, I would love it if you could catch my TV show WARRIOR coming out this October !

Thank you very much for your interview Chen, I wish you the best

More information about Chen, on Instagram and on IMDb 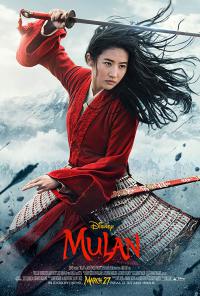