Release in India the 18 december 2015
With my opinion and my mark, also give your opinion and your mark. 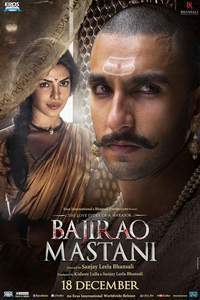 Bajirao 1, who fought over 41 major battles and many others, is reputed never to have lost a battle. Bajirao is described as "RANMARD" a man of the battlefield. Bajirao said to his brother "Remember that night has nothing to do with sleep. It was created by God, to raid territory held by your enemy. The night is your shield, your screen against the cannons and swords of vastly superior enemy forces. " Bajirao was a heaven born cavalry leader. In the long and distinguished galaxy of Peshwas, Bajirao was unequaled for the daring and originality of his genius and the volume and value of his achievements. Written by AMIT KHER.

In my area in France unfortunately I do not have of cinema  who release of  Indians  films, so I wait who it release in  DVD to see it

"Bajirao Mastani" is sublime with a very good staging, sets, gorgeous costumes.
Actresses Priyanka Chopra and Deepika Padukone who are really into their roles, really grandiose
Ranveer Singh and also in the role Bajirao is remarkable.

The story revolves around his three protagonists.
Songs and beautiful dances.

But I was disappointed because the lack of action from the trailer that makes believe otherwise and perhaps a little long.