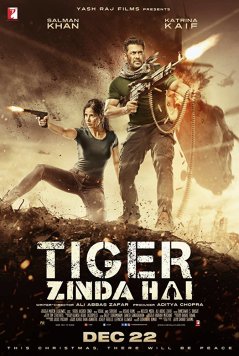 To see more videos on this movie

Tiger aka Avinash Singh Rathore & his wife Zoya have been diasavoved & presumed dead by their respective countries. When all hell breaks lose in a foreign land which places Indian civilian lives in harms way, Tiger is called back into action for an impossible covert mission to battle an international terrorist organisation. Will he succeed?

My opinion
Spectacular stunts, gunfires, battles and high-speeds pursuits, really a great action movie.
The actors and actresses are very good in their roles, and more particularly Salman KHAN and Katrina KAIF.