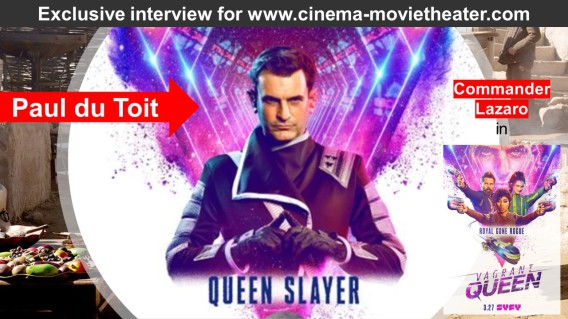 Hi Paul, I'm very happy to do this interview. And I hope this finds you and yours safe and healthy.

What could you tell us about your character Lazaro in TV Series Vagrant Queen (2020– ) ?

I suppose you would call him the villian of the series.He has been in pursuit of Elida for many years.

It has been for that time, his sole obsession. His ultimate goal is her elimination. She the last survivor of the monarchy, a line of royalty that he does not think deserves their power over their subjects.

He sees himself initially as a revolutionary, a liberator of the people. He sees this a quest to do what is morally right and just and in this scenario the end will always justify the means.

But what happens to the freedom fighter when the freedom he has fought so hard for is attained.

What then is the reason for his existence ? And what, if he is given power ? What happens to the soldier who becomes a leader after the war ?

It is here that Jam Garrard's script really started to resonate with me as an actor. Despite having the trappings of a snarky space opera, I could find nuance and complexity in my character that made him an absolute joy to play.

We had such fun on set. Jem is easy going, fun, generous in giving performers freedom and eloquent in telling you what she wants (when needed !).

She has such a solid understanding of her script and genre that you feel very safely supported as an actor. Adriyan Rae was a wonderful actress to pursue. She is a delicious combination of strong and sensitive, physical and spiritual. We connected as artists and as sports lovers !

And she does a kickass fight scene. Tim Rozon is awesome. He's laid back, but deeply professional. Very particular and focused but also hilariously funny.

He very kindly let me kick the shit out of him for what felt like a whole day and never complained! Alex Macgregor is just an absolute honey. Warm and sweet. You can't help but love her infectious bubbly energy.

Many of the other actors were also good friends of mine whoI'd worked with over the years, so coming to work felt more like a day hanging out with friends in a sci-fi theme park ! 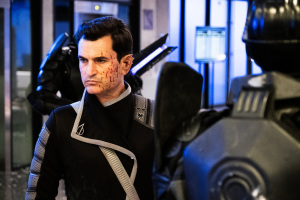 This was my first time working with Adriyan, Tim and Alex.

Hopefully not the last.

What was it like filming in South Africa ?
As a South African, I am really proud of what our industry as a whole was able to bring to this project: actors, stunts, art department, props, makeup, prosthetics, special effects, camera, lights, sound and post production.

The landscapes and architecture in and around Cape Town also let itself spectacularly to creating the multiple galaxies seen in the story.

There was a really cool, fun vibe on set and Ithink that show is the final product. The set was such fun that my son insisted on multiple visits to set.

It was paradise for a kid - space ships, laser guns, aliens, explosions...what's not to like for a 12 year old ! 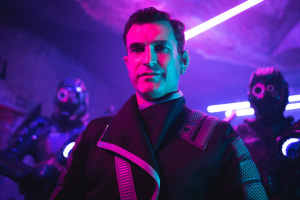 Did you read Comics before to perform in this series ?

Absolutely. the comic was the primal scream and the genesis of the series. Maggs' story and Jason Smith's art were a touchstone for me in terms of the basis for my character.

I felt is had to stay true to their ideas to start with. What Jem was able to do was add on layers of narrative and nuance that allowed the project to transition from comic to TV series ..

How long did the shooting for one season about Vagrant Queen ?
We shot for about 14 weeks 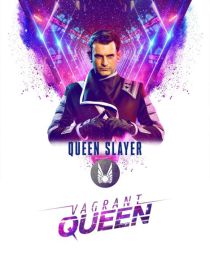 Can you tell us more on your role and the storiline of your next movie "Shaft 6" who will release in 2021 in South Africa ?
It's a dark South African crime thriller set in the gold mines around Johannesburg, exploring the shady worlds of mining, the police force,corruption, poverty, privilege. As a nation we many dangerous and violent secrets.

What happens when the present confronts our past.

to start filming again (under strict COVID 19 protocol, of course).

Whilst some projects are still on hold I start filming on what seems to be a hilarious new comedy with the working title STIEKYT.

It's about an out of work actor who, in a desperate attempt tp pay the bills becomes a drag artist is a revue bar.

He tries to keep it a secret from his wife because he thinks that type of work is beneath a "serious actor" like himself.

The comedy then morphs into an almost absurd,gory, murder story. Very dark and surprising. Very Coen brothers. I love it !

Thank you very much for your interview Paul . I wish you the best