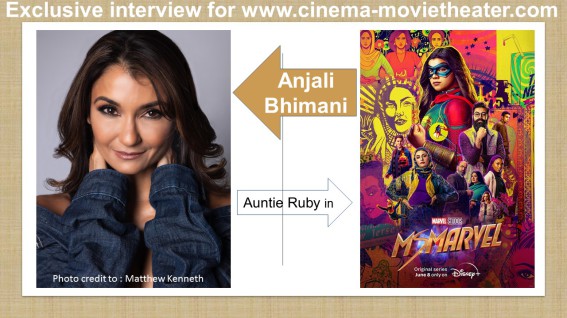 Hi Anjali I'm glad to do this interview

I’m happy to be doing it too!

Sure! I’m Anjali Bhimani, I’m an actor/singer/storyteller of all kinds…

I play Auntie Ruby in Ms Marvel, Symmetra in Overwatch, Rampart in Apex Legends, and a bunch more things you can look up on the internet.

I work in television, games, film, theatre, and pretty much any medium I can.

I’m also the host and author of I Am Fun Size. But I’m most proud of having the friends, family, and community of awesome artists and dreamers that I get to share all of this with, in person and online.

What can you tell us about your character in MS MARVEL?

Auntie Ruby is a high-energy, flamboyant, merry-making, gossipy auntie in the Khan’s close circle. South Asian aunties are a force unto themselves, and just like my aunties in real life, she’s fun-loving and full of heart. Auntie Ruby is the auntie I want to be in real life.

What did you find intriguing about the script for MS MARVEL when you first read it?

I wasn’t actually given the full script because most of what we shot was on a “need to know” basis to keep things under wraps as much as possible, and

I actually loved that since it meant every day on set was a discovery.

I was very intrigued by the story though, as I was familiar with Ms. Marvel from the comics, and I was so excited about bringing that character to life with the team I knew was involved.

And knowing that they would be making some changes to make it unique to this medium and to this telling of the story,

I was just excited to be a part of something this special. (Not to mention, ya know, it’s MARVEL.)

Had you worked with any of your co-stars before this series?

Yes! Alysia Reiner, who plays Agent Deever, and I have been friends since we did a play together in New York in 2004. She’s such a warm and loving person, it’s crazy how opposite she is to her character.

And then I was also friends with Saagar Sheikh, who plays Amir, through mutual friends that introduced us years ago.

And Sakina Jaffrey, who played Muneeba's friend, Shirin, and I go way back to when I did a show with her mother on Broadway.

So many fun people…but of course I didn’t know they were in it until we all got to set and discovered who was there.

Every day was a fun surprise on that set.

Did you enjoy shooting with your co-stars and directors?

SO MUCH. Every day work felt like a playground. Everyone there - cast, crew, creatives - seemed to have a strong personal reason for wanting to be there, more than just doing a job. So many times on set I’d look around and think

“Can you believe we get to do this? To tell this story? With these people?” and others shared in that sentiment.

It was just too much fun, every day. Plus everyone had such a unique and engaging personality that they brought to the work, it was just a joy seeing all these energies come together for this common goal.

You have won * 4 awards in the past. Is there an award that means the most to you out of all of them?

Hands down, the award for Best Actress from the GameHERS awards because it came from the community.

It’s always wonderful to be celebrated by your peers for a particular performance, but when the community that supports and enjoys and watches the shows or games that you’re in wants to celebrate you, it’s so energizing.

It means a lot to me that people connect with anything I do, and that they might feel inspired by the work I do makes it even more worthwhile to keep it up as long and as well as possible.

What is your next challenge/project?

My book, “I Am Fun size and So Are You!”, is going to be published in wide release at the end of August.

It’s been a huge labor of love, and when we ran a Kickstarter to create it last year, the response was so wonderful it gave me even more energy to put it out in the world.

It’s full of very personal stories, and lessons I’ve learned for myself (some the hard way) and I am really excited to get it out to as many people as possible to entertain, support, and remind people that no matter how unique their path is, or how challenging, they’re not alone.

After that I have some wonderful projects that are coming …  but unfortunately, I can’t talk about them… but I’ll be screaming about them from the rooftops when I can!

At the end of the day, I think any profession you’re in really is just a vehicle for you to follow your purpose.

And for some time now, I’ve been very lucky that my passion for what I do and my purpose of helping people see the biggest, fullest version of themselves and be able to take that out in the world, are both very much in alignment.

I hope that I get to do this until my last breath because taking people on journeys - both outside of themselves and inside themselves - and sharing that experience with them is just my greatest joy.

I’m very very lucky to get to do what I do thanks to the audiences and communities around me, and I know I’ll never take that for granted.

Thank you very much for your interview, Anjali and I wish you the best

Best Actress in a Supporting Role for IV-effing (2019)

Behind the Voice Actors Awards

Best Vocal Ensemble in a Video Game for Overwatch (2016)

Best Vocal Ensemble in a Video Game for Overwatch (2016)