Release in USA the 2 October 2015
With my opinion and my mark, also give your opinion and your mark.xte ! Vous pouvez le remplir avec du contenu, le déplacer, le copier ou le supprimer. 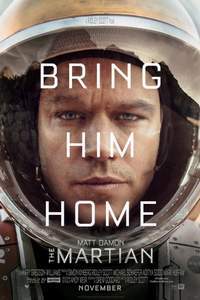 During a manned mission to Mars, Astronaut Mark Watney is presumed dead after a fierce storm and left behind by his crew. But Watney has survived and finds himself stranded and alone on the hostile planet. With only meager supplies, he must draw upon his ingenuity, wit and spirit to subsist and find a way to signal to Earth that he is alive. Millions of miles away, NASA and a team of international scientists work tirelessly to bring "the Martian" home, while his crewmates concurrently plot a daring, if not impossible, rescue mission. As these stories of incredible bravery unfold, the world comes together to root for Watney's safe return.Written by 20th Century Fox

The Martian is good entertainment, the beginning of the film is a little long, but as soon as he finds a way to communicate with the earth, there is more action. Matt Damon is great as the other actors. It is a film that is based on credible scientific issues, but there is also humor. The special effects shots are gorgeous you really like being on Mars. And there are using another country which demonstrates that united countries can make big thing and it is difficult to make such a distant voyage alone, it takes several countries united to succeed. What do you think?