Release in USA the 4 November 2016
With my opinion and my mark, also give your opinion and your mark. 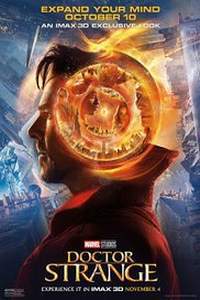 Marvel's "Doctor Strange" follows the story of the talented neurosurgeon Doctor Stephen Strange who, after a tragic car accident, must put ego aside and learn the secrets of a hidden world of mysticism and alternate dimensions. Based in New York City's Greenwich Village, Doctor Strange must act as an intermediary between the real world and what lies beyond, utilising a vast array of metaphysical abilities and artifacts to protect the Marvel Cinematic Universe. Written by Marvel.

To see other videos about Doctor Stange

Visual effects and virtual stunning, action, humor and no downtime in this film,. In addition 3-D that brings more.
After the series Sherlock, Benedict Cumberbatch is very good in this film, a custom role.
To see good entertainment