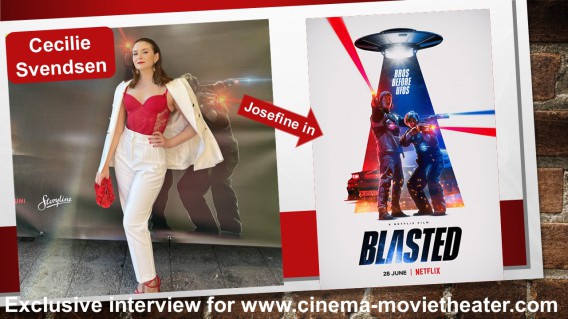 Hi Cecilie I'm glad to do this interview

Thank you, I’m glad to do it as well!

What could you tell us about your character Josefine in Blasted?

Josefine is a vibrant, adventurous redhead who is excited for her life with Sebastian, but sees that his obsession with his work might get in the way of his health and their life together.

She loves excitement and adventure but at the same time appreciates the simple, ordinary joys of a homely life.

The director, Martin Sofiedal, and I worked a lot with a backstory for her about her owning a flower shop, even though that was never supposed to be shown or talked about in any way. But it did bring some flavor to her that I liked. It sort of created a complex «life-loving but natural down-to-earth girl» that was the basis of the character. So there’s a little fun-fact for you :-)

What interests you when you read this script?

I think the part that I love the most about the script is how the characters work together. They are brilliantly written and put together and you can tell that the script writer and director have put a lot of thought into how they could both elevate the comedy but at the same time keep the heart in the movie.

get to pass through, but not necessarily carry too much weight.

It’s those little moments you might not pay too much attention to until you read or watch it for the second or third time.

That’s my favourite kind of comedy, the kind that passes you so quickly you have to stop for a second and say «wait, whaaaaat?». It’s not on the nose, and sometimes you have to be quite quick to catch it (so this is the part where I say

I always watch movies like that five times before getting it, right?).

Also, the actors are incredible and truly have made the dialogue come alive, so the film works even better than the script - not knowing that could be possible when I read it!

How is the shooting with Axel Bøyum, Fredrik Skogsrud, Ingrid Bolsø Berdal and the director Martin Sofiedal ?

Axel has some of the best work ethics I have seen on set, which I admire him for. He has all the qualities; he is professional, funny, has exeptional timing and knows how to use is voice for elevated comedy, plus he is also a terrific dramatic actor.

Let’s also not forget how extremely nice he is, which in fact everyone on set were. I didn’t get to work with Ingrid on set but it was so cool to see her in that part! She truly showed a new, and really funny side of herself. Fredrik is great as always.

I know Fredrik from before, and have seen several of the films he has worked on, so working with him on a set for the first time was kind of like I imagined - easy, flowy, fun and nice.

You can always count on Fredrik to deliver, and he is just so great to work with.

Working with Martin Sofiedal is always a blast (pun intended). I don’t think I’ve ever been on set with Martin without laughing or without walking out impressed by his work.

He is a comedic genious and has a really cool visual eye that he is able to combine in a not-so-Norwegian way (intended in the best possible way). Norway is not primarily known for its sci-fi-action-comedy, so Martin here was kind of groundbreaking on this end in Norway.

Also, he loves improv, which I find quite liberating. The script in itself was great, and then when you get to work with the other actors and the director in such a playful and loose setting, some truly cool and funny nuggets tend to appear.

How long did the shooting for this entire movie take and where was it filmed?

I think the entire shooting of Blasted took place during 1-2 months, primarily in and around Oslo.

I was in Lithuania shooting the TV-series «State of Happiness» during the first part of the shooting, and when I came home I had to go through a quarantine period due to Covid-19-restrictions.

So when I first got out it was right into costume and make-up-tests and basically right on set. I felt really lucky to be able to shoot both these projects during those months as it quickly could have worked out another way due to Covid-restricitons. I had to pass on other roles because of the restrictions, so I am just thankful I got to partake in these projects.

I worked with and talked a lot with the director, Martin, as well as rehearsed with him and Axel to find the character. For us it was important that Josefine had some of the same childlike nature that Mikkel had - as they both could see the same struggle in Sebastian.

If Josefine was adventurous and energetic, she would more easily reach out to Mikkel and see what Sebastian needed to loosen up and live a little.

So I guess we started from opposites - how is Sebastian like in the start of the movie, and what does Josefine therefore need to be to see his need?

I also have to give a shoutout to the make-up artist Dimitra Drakopoulou who suggested maybe Josefine should be a redhead with freckles - a suggestion both me and Martin loved.

I felt those details added that extra layer to the character and made her more loveable and loving of life in a way, which helped a lot with creating the character.

In 2018 you won best actress for Livet med Døden (2018) at The Norwegian International Seagull Shortfilm Festival.
What does this award mean to you?

Anders, the director and co-actor in this film, and I worked a lot with this and

I know that the awards we both got means a whole lot for the both of us. Anders is someone I very much look up to.

He is one of the most positive and result-oriented people I know, and this film and these awards are just a few of his many accomplishments.

On top of that he is also one of the funniest people I know and a dear friend of mine, so getting to win this standing side by side with him was a great milestone in my life.

Is there an origin for your name Svendsen?
Svendsen is originally a patronymic which means «Son of Svend». Patronymics like this is a way of giving hereditary names which was very popular during the Viking ages and also today very much so in Iceland, as far as I have understood.

My father´s name is Erich, so Svendsen for us today is just a name brought down the line and doesn’t have the same meaning as it did originally.

I know some people who have changed their names to a patronymic to honor their mother or father though, which I think is really cool.

I have a few shows filming this fall which I think will be super-fun. But the project I think excites me the most I don’t think I can reveal too much about.

What I can say is that I am in intense training working harder on my fighting skills and I am stretching more than ever to prepare.

I have a black belt in taekwon-do, so the base is there, but this role requires a bit more, so the training is quite necessary.

Being able to do just that - train hard and prepare for a role which is both physically and emotionally challenging - has always been a dream of mine. So you can say I am sort of motivated. Or tremendously. Take your pick.

Do you wish to add something?
Thank you to everyone who has seen Blasted so far. It truly means a lot. If you haven’t seen it yet, make sure to tune in on Netflix and check it out (and see if you can spot my fake freckles!)

And if you throw up a little in your mouth every time you watch something in a foreign language, the film is dubbed to many different languages - so that you can throw up many different ways. Or not throw up at all.

More information about  Cecilie on IMDb