War for the Planet of the Apes (USA) 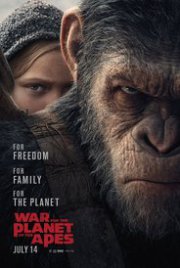 To see other videos for this movie :

Caesar and his apes are forced into a deadly conflict with an army of humans led by a ruthless Colonel. After the apes suffer unimaginable losses, Caesar wrestles with his darker instincts and begins his own mythic quest to avenge his kind. As the journey finally brings them face to face, Caesar and the Colonel are pitted against each other in an epic battle that will determine the fate of both their species and the future of the planet. Written by Twentieth Century Fox

My opinion :
A trilogy that ends well. By showing human stupidity, always wanting to make war, a bloodthirsty dictator who absolutely wants a wall to protect himself and also a festival of special effects