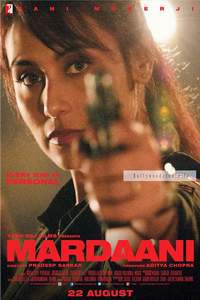 Storyline
India is the world's hub for child sex trafficking - Nearly 40,000 children are abducted every year - Every 8 minutes a girl child goes missing in India. Mardaani, is a story of Shivani Shivaji Roy, Crime Branch, who sets out to confront the mastermind behind a child trafficking mafia. Written by Official source

I just saw this movie on DVD, because unfortunately in my region in France, Indian films do not release
I hope that Rani Mukerjee's film, through its dissemination and success, could raise public awareness of the abduction of minors and the safety of women in India.
It's a very good thriller to see
Rani Mukerjee and the children are very good in this movie.