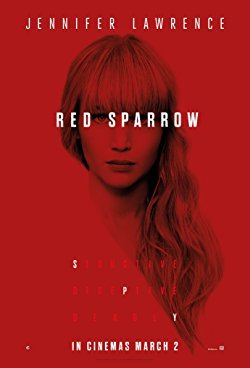 A young Russian intelligence officer is assigned to seduce a first-tour CIA agent who handles the CIA's most sensitive penetration of Russian intelligence. The two young officers collide in a charged atmosphere of trade-craft, deception, and inevitably forbidden passion that threatens not just their lives but the lives of others as well.

My opinion: (Sorry for later but the movie is release in France the 4 April 2018)
A psychic espionage thriller with scenes that are hard.
A bit long, despite an impeccable interpretation of Jennifer Lawrence but yhe other actors are good too