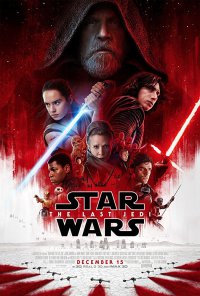 Having taken her first steps into a larger world in Star Wars: Episode VII - Le réveil de la Force (2015), Rey joins Luke Skywalker in an adventure with Leia, Finn, and Poe that unlocks mysteries of the Force and secrets of the past.

The scenario is clear, there is action, humor, the characters are endearing.
The actors are well in their role, the only problem the film is long too long.

I saw it in 3D and I think it brings more