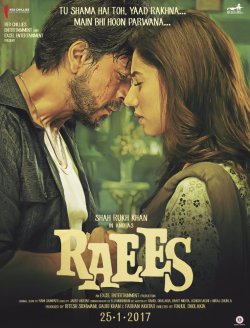 Storyline
The film is set in the early 80's and 90's in Gujarat. The fictitious story of a man who builds an empire in the state of Gujarat, the only state that still follows prohibition. It's a story about his rise and his relationships, which help him become the single most powerful man in the state. Written by RedChillies.

I am sorry to put my opinion so late, but in my region in France, I do not have a cinema which releases of Indian movies, so I wait, which  it releases on DVD.

Raees is a person with a big heart who helps the people of
his neighborhood enormously, but to do this he uses dirty money
with the traffic in alcohol in full prohibition and he does not hesitate
to defend himself and Eliminate competitors.
We follow the ascent of a man and his terrible descent into hell.
In the end, "Raees" is an effective film, a good entertainment that owes much to its casting and more particularly to Shah Rukh Khan