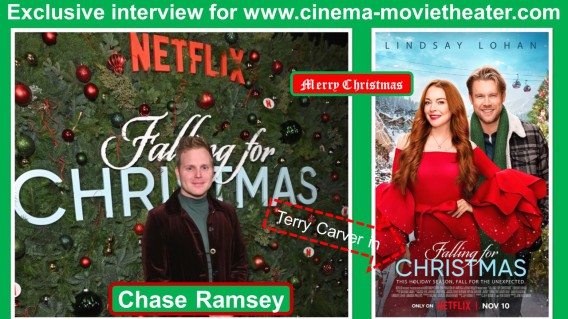 Hi  Chase I'm glad to do this interview

Can you introduce yourself to the visitors of cinema-movietheater.com?
Currently living in New York City with my spouse and three children. Known for Kevin Costner's upcoming Horizon Series (WB), Falling for Christmas (Netflix), Sweet Pecan Summer (Hallmark),

The Storied Life of AJ Fikry and The Book of Mormon Musical on Broadway playing Elder Cunningham. Also known for his work as past food network host as well as a director for the Walt Disney company.

Chase is a published playwright and produced screenwriter.
See him on Instagram @chasekealaramsey

What could you tell us about your character Terry Carver?
Terry just wants to be loved. He wants a best friend.

The type of person that acts before he thinks and that can get him into trouble.

Life is moving very fast for Terry and he is trying to keep up. His ADHD is his super power and perhaps his weakness at times.

Terry isn't ever sad... in public. He puts on a face to get what he really really wants, to be loved. 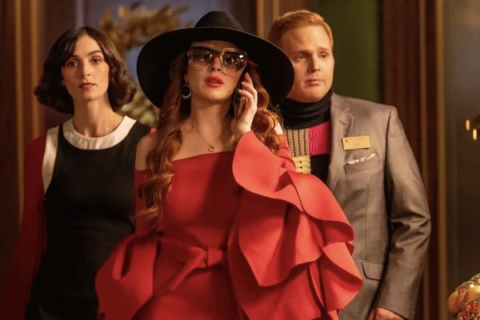 How did you prepare for your role?
Although my process has gotten significantly more specific and much better in many regards Terry took up space. I remember working him in my office and putting it on it's feet with something called, Laban Movement.

Once I found his speed I began to dive into the why! It was at this time that I was diagnosed with ADHD and found out I had been living my life with baggage that could be helped.

I made the choice to finish Terry without medication when I realized that he is undiagnosed ADHD. So, I let that in.

Very vulnerable and sometimes scary as I was struggling more than ever to "nail it" on set. But that's Terry isn't it? He is trying SO HARD for people to love him that it becomes almost too energized, like he is trying too much! I love Terry. God, I love him.

What interests you when you read the script about  this movie?
Well, I love a Christmas Movie like anyone does and there are a lot of them out there. This one was one of the good ones I have read out of the many.

I loved the connection to one of my favorite movies growing up, Overboard and that was a big bonus. But if you told me Lindsay was making her comeback I would have done anything to be a part of it. 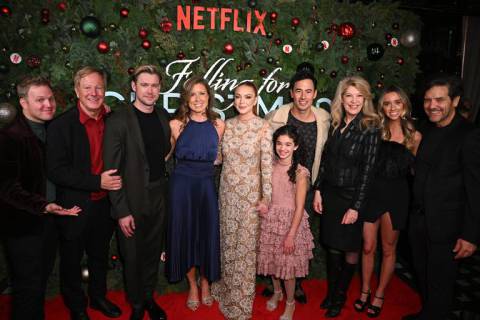 How is the shooting with Lindsay Lohan, Chord Overstreet, George Young........ and the director Janeen Damian?
Lindsay was wonderful. I remember our first day on set together she had this big phone conversation and sequence to shoot.

You're talking on the phone (with no one by the way) and someone is doing your nails, feeding you food and drink, and just... Chaos.

I remember having a moment where I was like, "well damn... She's a pro".

I wore a jacket with her face on it for the movie premiere because silly is my brand and she just loved it. We had a great catchup conversation and she was lovely. So human. I didn't work much with Chord but I think his process was a little more internal and to himself. He's a talented artist and great singer though and I can't wait to see whats next. George Young is everyones favorite human. Truly one of my favorite collaborators. Just, kind!

Happy! And this role of Tad had SO much play involved in it. It took someone like George to be open and fun. Will never forget my time handing with George. Janeen Damian is a God among humans.

She had to work sensitively with star power while building the finesse and flair of the movie. She is a blessing on this earth and I would take a bullet for this person. And her husband Michael Damian.

I felt like I belonged from the moment I stepped on set and that is every actors dream. It starts and ends with Janeen and she was everything I could have asked for in a leader.

There was one ad-lib she came up with when I stop mid sentence and say "oooo, shiny".

That was all Janeen. She is genuinely funny and wonderful all in one person.

where is the movie shot? And when ?
We shot the movie over a year ago in Park City, Utah. A lot of that snow is the real thing. It was cold. 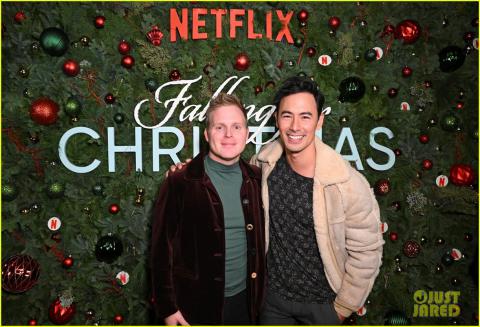 What is your next challenge / project?
I am in Kevin Costner's new Horizon movies. Currently with WB. So I have been working with him and a great group of actors! I am always looking for scripts and jobs though... So, let me know.

Just grateful to be a part of such a great film and wonderful team. I truly just love acting and hope to do it every day but the magic comes with the director calls cut and you spend time with your community.

This movie was a lot of that and I am grateful.

More information about Chase  on Chase Ramsey,  on Instagram and on  IMDb.

I found this movie very welll for a Christmas movie. I had a good time watching  it.
All the actors are very good with a special mention for Lindsay Lohan.