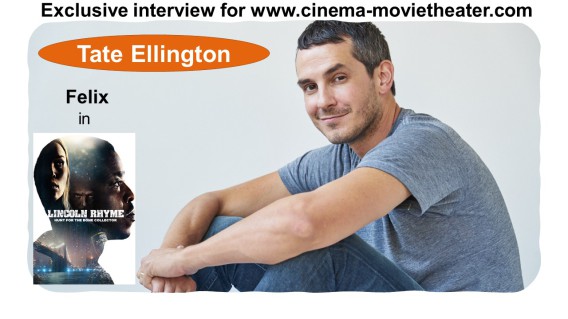 Hi Tate, I'm very happy to do this interview. And I hope you are well.

What did you like in your character about Felix in Lincoln Rhyme: Hunt
for the Bone Collector?
The thing that I loved most about the character of Felix was his honesty. I loved that Felix was unapologetic about exactly who and what he was.

He was smart, determined and confident, but also understood the need for collaboration.

I believe that underneath his “sarcastic” outward appearance that he was a truly caring person who would do anything for his friends and colleagues.

What did you interest when you read the script?
I am a sucker for a good game of cat and mouse, so I was immediately drawn to the nature of Lincoln Rhyme and the Bone Collectors relationship.

What makes classic characters like Sherlock Holmes and Professor Moriarty so fascinating is that with the simplest twist of fate they could have switched places.

I believe the same thing applies to Lincoln and the Bone Collector.

What is amazing about them is how similar they truly are, and I love that.

How long did the filming for this show season 1?
W e shot the pilot for the show in late March of 2019 in and around Brooklyn, NY .

Principle photogra phy on the pilot took about 2 ½ weeks of filming.

Once the show was picked up to series, we relocated to the IZOD Center in New Jersey.

We star ted filming  there  in September of 2019 and wrapped on the series in later January of 2020. So overall we shot for about 6 months.

How is the filming with Russell Hornsby, Arielle Kebbel, Roslyn Ruff ,
Michael Imperioli......... and Creators: Mark Bianculli and VJ Boyd?
This cast was an absolute delight to work with. I couldn’t wait to get to set each day to see them.

He made the set a relaxed and peaceful place.

He welcomed collaboration and was an absolute pro.

The same goes for Arielle.

She was sincere to a fault. She gave the character of Amelia Sachs everything she had and brought that determination to set each day.

As for Michael, I was extremely intimidated to work with him a first.

I am a huge fan of the Sopr anos and I sort of expected Michael to be like Christopher, the character he planned on th at show.

Nothing could have been further from the truth. Michael is one of the sweetest people I have ever met. H e is so thoughtful and soft spoken and gentle.

It was amazing to watch him work. Roslyn was simply badass. She is a true actor through and through.

I love her to death. The same goes for Ramses Jimenez, the dedication he brought to his character was something to see. The person I spent the most time with was Brooke Lyons, who played the character of Kate. I could not have asked for a better partner.

She was always on point and up for anything. I loved collaborating with her.

I loved everyone in this cast, and I learned so much from each and every one of them. As for Mark and VJ, we could not have asked for better Creators.

They were wonderful and I can’t wait to work with them again. 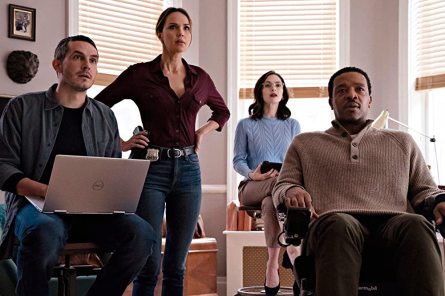 Did you perform with your co - stars before this show?
The only person I knew and had worked with before we started filming was Brian F. O’Byrne ,
the Bone Collector himself. Brian and I had worked together for a project called Theater of War, which you can follow on Twitter @TheaterofWar.

It is an organization that uses readings of ancient and modern plays to address public health and social issues.

Brian is an absolute powerhouse of an actor.

He is just amazing. I was so excited when I found out he was playing
the Bone Collector because I knew he was going to slay the roll, pun intended.
Although I didn’t get to share any screen time with them, I did know two of our guest stars.

I am dear friends with Neal Bledsoe who appeared in episode 7 of the series.

I am also friends with Hadi Tabbal who appeared in episode 6.

Hadi and I had worked together as series regulars on another NBC show called The Brave. I absolutely adore him.

I wish that there was because I loved working with this cast and crew. 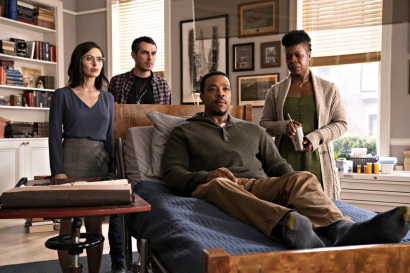 Did you see the very good movie The Bone Collector (1999) with Denzel
Washington, Angelina Jolie, Queen Latifah..........before that you start the
filming for your series?
I did see the movie years ago when it was first released.

I thoroughly enjoyed it. I did not re -watch it before we started filming because

I wanted to make sure that I  was not imitating
anything about the film.

I also knew that we were going i n a different direction than the film,

so I wanted to keep my mind clear.

I did however read the book, which I loved.

You were in Main cast in Quantico, your character was Simon Asher.

How was the filming with Priyanka Chopra and your co - stars?
I had one of the most amazing times of my life working on that show.

The character of Simon Asher will always hold a place in my heart.

I loved bringing him to li fe on screen .
I love Priyanka. She is one of the hardest working individuals I have ever seen. She shows up an d she gets it done. She is also, boldly kind, warm and true. The same goes for the rest of the cast.

I love them all dearly and we still keep in touch.

Just an amazing group of actors and friends. 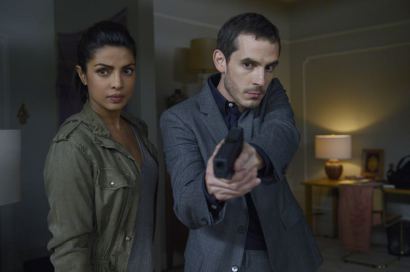 I know it is difficult to predict what the future holds fo r movies, TV
series, etc. for the moment with Covid - 19, but what is your next
challenge / project?
I just wrapped on a film titled Jess Plus None.

It was an outstanding experience.

I adored every minute of it. We were up in the Angeles Crest mountains in California for two weeks s hooting .
We had all been vaccinated so we were able to relax a bit. It was the first that most of us felt back to normal in over a year.

It was extraordinary. All the actors and crew were just authentic wonderful human beings.

We made a great film, and I can’t wait  for everyone to see it.  As for what the future hold s , who can say, but I can’t wait to find out.

Do you wish to add something?
All I want to say is thank you to all of the fans of the show .

Thank you for watching and I hope you enjoy.
Also, I know it has been an insanely hard year and a half for everyone and that there are still so many people suffering, my heart is with you all.

Thank you very much for your interview Tate. I wish you the best