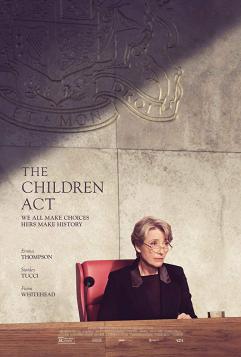 Storyline
As her marriage to Jack flounders, eminent High Court judge Fiona Maye has a life-changing decision to make at work - should she force a teenage boy, Adam, to have the blood transfusion that will save his life? Her unorthodox visit to his hospital bedside has a profound impact on them both, stirring strong new emotions in the boy and long-buried feelings in her. Written by Duncan Kenworthy

Emma Thompson, is just remarkable, she carries on his shoulders this film on the value of life and freedom of choice.
But she's also a woman who sacrificed her life as a wife,
mother for her work as a judge.
The other actors and actress are very good too.
But I thought it was a film closer to Philadelphia (1993)
with Tom Hanks, Denzel Washington .......
With a more in-depth legal part.