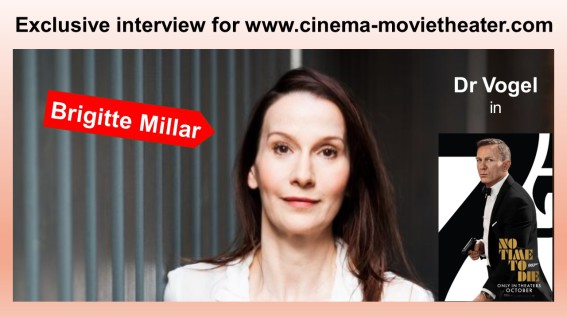 Hi Brigitte, I'm glad to do this interview

Can you introduce yourself to the visitors of cinema-movietheater.com?
I am an English / German actress with a base in London and Germany and probably best known for my role as Dr Vogel in 007 James Bond Spectre and No Time To Die.

What could you tell us about your character Dr Vogel in No Time to Die?
She is a scientist and Spectre member and close friend of Oberhauser.

How was the filming with Daniel Craig, Ana de Armas, Rami Malek........... and with the Director Cary Joji Fukunaga?

it was very exciting and creative.

We did improvise the scenes I am in.

Working with background artists is often very challenging and it can take a long time to get things right.
Daniel Craig is a eligth to work with, he is so generous and the perfect Englsih gentleman. 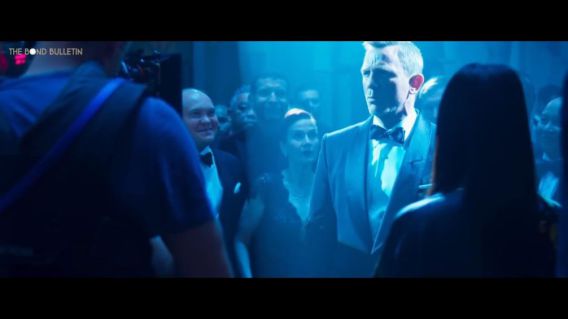 Brigitte Millar as dr Vogel in No Time To Die 2021

I was on set for 7 days. that is how long it took to finish our scenes.

I didn't have to prepare as I had already played Dr Vogel in Spectre.

But I did tune into the character again before coming on set.

".............In 2011, she won the award for Best Supporting Actress at the Los Angeles International Film Festival for her role as "Amelia Holland" in the multi-award winning feature film "David is Dying" directed by Stephen Lloyd Jackson. . This film won 8 awards in the United States alone. The first independent British feature film to do this.........."
What is the award you have won, who was the hardest to win and the most rewarding for you?
I think the most amazing film I got an award for was NOX directed by Keyvan Sheikhalishahi.

It was really exciting and challenging to film in such a short period of time, but to win several award for it is amazing and makes it all worth it.
I was awarded Best Actress for Nox at the London International Motion Picture Awards in England...

What does this photo and the shooting of this movie remind you of?

My scene in Harry Poter with Natalie Tena, Daniel Radcliff and Brendon Gleeson. Sucjh a l ong time ago now, but still lovely to remember

My scene in Spectre and the excitement of working with Christoph Waltz.
so nerve wrecking with more than 100 exrtas in teh scene.

I am waiting to hear back, but as you said it is all a littleuncertain at the moment due to covid.

Thank you very much for your interview Brigitte and I wish you all the best.

And to you Jean-Paul 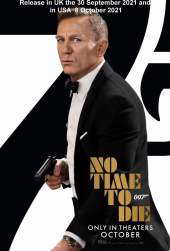