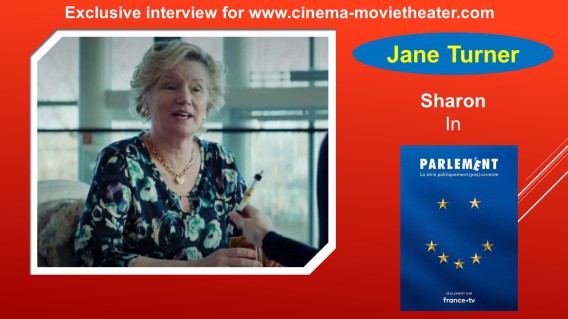 Hi Jane, I'm very happy to do this interview. And I hope that you and yours are safe and healthy.

What could you tell us about your character Sharon in TV Series Parlement (2020– ) ?
Sharon Redlion is a crazy Brit brexiteer minister in the Parliament . She’s been there forever and doesn’t want to leave ... though she spends most of her time flying to England to see productions of Cats, the musical! ( she’s even it 57 times I think). She is very patriotic ...

How is the filming with Liz Kingsman..........and directors Jérémie Sein, Émilie Noblet ?
I had a wonderful time with these  guys ...Liz Kingsman... she’s Aussie so we were on familiar terms already though I’d never met her .... we have the same sense of humour and all the same cultural reference  points.

She’s great very understated and funny.
The directors were lovely ... young,smart and very kind . They let me do whatever I liked ... so nothing wrong there .. ha !

Did you perform with your co-stars before ?
No I hadn’t worked with any of them before.

I’m a bit out of the loop but I knew some shows Liz had been in. Actors are generally so lovely and we have a connection so we all clicked.

You are Australian, you discovered the European parliament to Bruxelles. What do you think about parliament ?
I didn’t get a chance to see any of the sessions of the European Parliament but
I have a great respect for it.
It’s a political hub so you see close up all the talks and lobbying that goes on in the cafes and corridors .

Parlement captures the huge potential for  comedy in that so well.

How long did the shooting for the season 1 about Parliament ?
I’m not sure how long the entire shoot was ... I was called to Brussels and Strasbourg on sporadic shooting days all helped along by the train strikes before Christmas . I think I only shot for 5 days total.

Did you find a solution after Brexit for the border between the 2 Ireland ? LOL ;o)
Yes I did solve the Irish border problem Michaël but I’m not able to speak about  ...it’s being tabled as we speak.

When and why did you choose to be an actress ?
I knew since I was very little I didn’t want to do anything else ...

I studied law at uni. But hated every minute of it. Frankly there is nothing else

Your daughter Anna Denton is a model, do you think that after to be model, she will be actress as you ?
No Anna did model for a while in her teens and is now a photographer.

I think she would be a wonderful actress she’s gorgeous and funny but ..

nil interest.
My son Nick is an actor and is doing really well. He’s got ‘it’! ( no bias).

After catastrophic fires, for humans, animals as Koalas.......... and flora, there have been Covid-19. I wish all the best to the Australia.
How is Australia today ?
Yes like the whole world Australia has been through the wringer( Aussie expression ... comes from the old washing machines).

It’s a tough time ... Australia has faired well comparatively...  grimly ,geographic isolation can have an upside .

What is your next challenge ?
I guess next for me is like everyone seeing what’s going to happen...

I’m a grandmother now so more than ever the climate and the poor environment are very much on my mind.

Thank you very much for your interview Jane. I wish you the best

More information about Jane, on IMDb