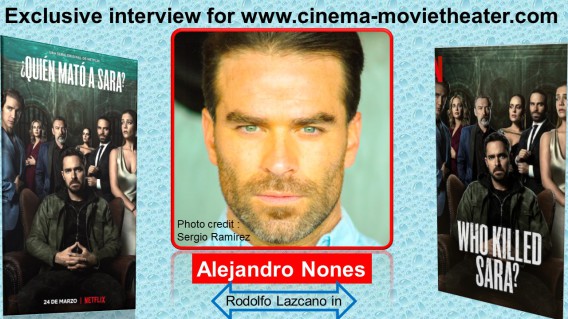 Hi Alejandro, I'm glad to do this interview

I was born and raised in Caracas. Then I moved to Cuba to study percussion and I’ve been acting for 18 years.

What can you tell us about your character Rodolfo Lazcano from WHO KILLED SARA?

Rodolfo is a special character. He is a character who is full of guilt at the beginning of the story. He has a darkness inside him.

He is a character that tries to own his life throughout the 3 seasons.

He is a complex character. I was very lucky to portray Rodolfo.

What interests you when you read a script? What did you find interesting about the script for WHO KILLED SARA?

First, I read the script as a normal reader to see how the stories touches me.

If I connect with it, that’s good enough for me.

How did you prepare for your role in WHO KILLED SARA?

Then I start to work with my acting coach on expression, voice, finding an energy that connects with all the homework I did.

What was it like shooting with Manolo Cardona, Carolina Miranda, Ginés García Millán, and Eugenio Siller?

It was amazing. We’re like family now. Of course, when you shoot a show you become very close to the people you’re working with.

But when you’re shooting something that you know is a hit – an international you hit – of course it feels more special, so you connect on a different level with the people you’re working with.

I think with WHO KILLED SARA? we all had a special relationship to one another.

How long did it take to shoot the entire season?

It took around 2 and a half months. We shot in Mexico City.

It was very special because the shoot was full of happiness.

Everyone was happy to be there shooting the ending of an international hit.

You have won a Telenovelas and Drama Series (Telenovelas y Series Dramáticas), Best Male Villain in a Telenovela (Mejor Villano) for Amar a Muerte (2018). What does this award mean to you?

I’m grateful. I try to receive what life gives me, but at the same time I choose not to base my career on things like awards.

That you give your soul to each character that you play - that’s the only thing that matters.

I try to do that every day of my life. It’s not that I don’t care about awards, but I don’t give much energy to them.

What is your next challenge or project?

I shot three shows after WHO KILLED SARA? One is Malverde which is on Netflix everywhere. It’s not in the States yet. It’s been in the top 10 on Netflix in many countries. I did a show for Amazon Prime called An Unknown

Enemy it’s based in the 70s I play a guy who was an informant for the CIA, Mexican government, and also the most important drug dealer in Mexico at that time. He is Cuban, bisexual, a special character.

I had so much fun playing that character. I am also going to Turkey at the end of the year to do a series in Istanbul for 3-4 months.

Is there anything else you would like to add or promote?

I’m dying to play a character in an American story so let’s see what life has to say! But I hope soon. And in our next interview I can talk about a show or movie from the United States.

Thank you very much for your interview Alejandro. I wish you the best