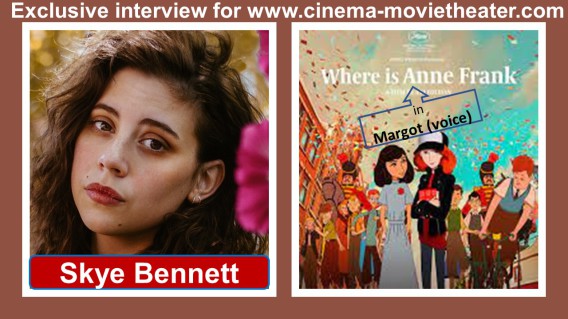 Hi Skye, First, I'm very happy to do this interview about you

“Thank you for having me! I appreciate the intrigue.”

“Sure! My name is Skye Bennett - I’m an actor, writer and musician.”

What did you like about the storyline of Where Is Anne Frank and about your character Margot?

“I thought the premise was really unique and thoughtful.

It felt like the sort of movie Anne herself would’ve really enjoyed.

It’s not only respectful of Anne and her family, but you can imagine it’s representative of Anne’s imagination and spirit. It’s not just a retelling of the same story.

With my part - it felt less like a storyline and more just Margot’s life. Not too many creative liberties were taken with Margot’s parts - so I just tried my best to convey her sweetness, sadness and hope surrounding the situation.”

“It was fun! It was nice. I loved the experience. Most of the voice work I’d done before this job had been by myself - acting alongside scratch takes or pre-recorded takes.

So, it was nice to be in the room with the actors and play out the scene with actual people.”

“Well, most of the characters in Where Is Anne Frank were meant to have a hard-to-define accent.

There was an English / American thing going on. That was a challenge initially, but once we got the accent down it was second nature.

My whole family are American, and I was raised in England - so my own accent is a weird mix anyway! That was helpful.

With regards to Margot’s cadence, she’s expected to be mature, calm and composed so I wanted to convey that in her voice, but also honour the fact that she was still young.

There’s only so much you can expect from a teenager who’s sad and afraid. Having said that, she also seemed to be able to find brief moments of joy or silliness from time to time. Like everyone did, I suppose. If you don’t laugh, you’ll cry.”

“Not really - there are just different challenges. You have to rely on your voice for everything, which can be a challenge - but when you include your body and your face, you’ve now got to battle with physical self-consciousness and line-learning.”

You started releasing music as Deva St. John since October 2018.
Your music, voice, and your clips are very well.

When and why did you choose to be an actress  and singer?

I became interested in singing and songwriting when I was a teenager, but because I was working as an actor, I was discouraged from pursuing music. I was told by people I trusted that it might “confuse the industry.”

I wish I’d never listened to them. Feeling shackled and unable to explore who I was really affected me.

I also got diagnosed with Cystic Fibrosis and started questioning my sexuality - so a lot was going on and the only thing that made me feel better was writing about it. In an attempt to separate my music and my acting, I decided to go by my middle names Deva St. John for music and my first and last names Skye Bennett for acting.

“At the moment, I’m working on a highly anticipated triple-A video game that I can’t really talk about. I’m extremely excited about that. I’m also in a new Apple TV series called Suspicion that’ll drop on February 4th 2022.

I’m also aiming to release my debut EP in Spring 2022, and sell a TV show that I’ve written.”

“Thank you for the interview! Where Is Anne Frank is a beautifully written and animated movie and I really hope people love it.”

More information on Skye on Instagram, on Denton Brierley and on IMDb 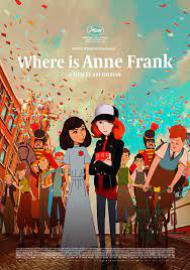