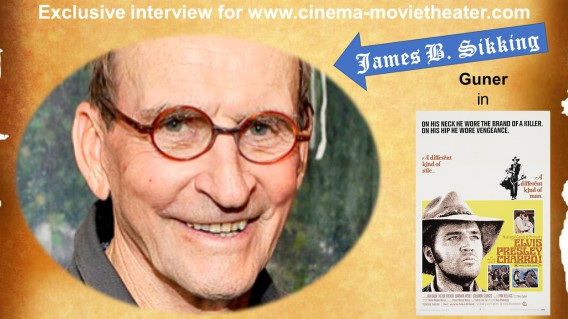 Hi Mr James Sikking, I'm very happy to do this interview. And I hope this finds you and yours safe and healthy.

What did you like in your character about Gunner in Charro
(1969) and when you read the script?
Gunner was a pretty typical western bad guy.  It’s always fun and challenging

to play those characters and find some unique quality and personality. 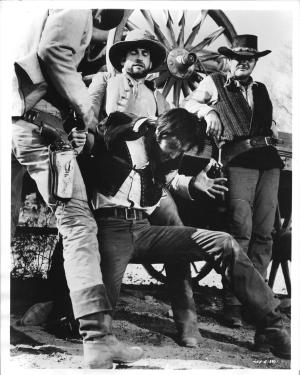 How did you get this role?
My agent set up the audition as I remember.

How was the filming with Elvis Presley and the Director
Charles Marquis Warren?

Elvis was a very kind guy.  Always polite to everyone.  But he was hounded by his fans who would show up at 6:00 AM on our way to a remote location out in the middle of the Superstition Mountains... in the middle of nowhere just to
see his car or catch a glimpse of him.
Warren was a good director.  He was a very well regarded western director in those days.  Rather legendary actually so it was a real boost to my career to work with him.

Westerns were an avenue and a genre that expanded your repertoire.

Do you have any anecdotes about Elvis?
After cast party, Elvis told me that he wanted to be an actor not just a singer.

I told him play the costume and the environment.

If it’s dirty, you pay it dirty.  Be what you are.
Elvis sang at the cast party.   His agent tried to stop him but Elvis wanted to do it for them.  Very professional, always on time and knew his lines.
On location they had wagons for each actor, Elvis took his name off his because the fans were everywhere.
Elvis became very close to myself and Victor French and would often turn to us for guidance.

Did you perform with your co-stars before or after Charro?
I knew Victor French as he had been very active in the local theater scene in LA and my wife had been in a play with him that he also directed.

He was very serious about acting and very talented.

He died very young as I recall.

So did Soloman Sturges who was the son or nephew of the famous
director, Preston Sturges.

You perform before and after* Charro. But what did this role of Gunner bring to you in this movie for your career?
It demonstrated flexibility and diversity.  Every actor wants to do a western.  It’s the most fun with horses and guns and very clear good and bad guys.

At least in those days that was what a western meant.  Not much subtlety there.

How long was the filming of this movie ?
About 4 months as I recall.  It was a long time ago.

Elvis Presley sings just for credits for this movie, did he sing  sometime outside shooting? Elvis wasn’t allowed to ever sing without permission from the Colonel in case someone would record it and sell it.   They were very strict about that.  Also, Elvis wanted to be regarded as an actor and felt this film was his chance to break out of the teenage musicals he had popularized.

This is the one of the last movie of Elvis who died a year later. Did he already have health problems on this shoot ? We were not aware of any health issues.

He was tireless and very professional.

Always ready on time and prepared.  A really great guy.

Mr James Sikking when and why did you choose to be an
actor?
I liked creating characters and being someone else.

Getting into a story and becoming a part of it.  At El Segundo High School the Junior class had to put on a play to finance the senior prom.

I got involved and was cast in the play, “The Man Who Came to Dinner.”

I played Sheridan Whiteside.
When I said my line, “I may vomit,” the audience roared with laughter and I was hooked.  I thought, “This is for me.”

What is the role you have performed, who was the hardest
but the most rewarding for you?
Howard Hunter on “Hill Street Blues” because he was complicated and not always likable.

I was an easy going, happy guy so I had to find the humanity in him.

Howard was not ever totally happy or loveable and you have to find
qualities to endear him to an audience without making him an exaggeration or unbelievable.

He had to be totally believable.

Thank you very much for your interview .Mr James Sikking I wish you the best and take care

James B. Sikking has a wonderfully exciting face that has given us drama, comedy, tragedy and hilarious farce. During his career, he has

The complete series on DVD is now available through Amazon and local retailers from Shout! Factory.

He also did a three year stint on ABC's “General Hospital” and in 1988 “Mad Avenue,” a pilot for CBS.

James has continually been in the viewer's eye with many diverse roles:

“Nowhere to Land,” TBS Superstation, “Submerged,” “In Pursuit of Honor” father of a dysfunctional family in Fox Television's “Doing Time on Maple Drive.” “Mutiny,” NBC Movies of the Week, and “Tyson” for HBO.

He starred as 'Phil Carter.’ A personal favorite was his portrayal of a Hollywood Producer in “Tales from the Hollywood Hills: Golden Land” for PBS's

He co-starred in NBC's mini-series “Brotherhood of the Rose” and “Around the World in 80 Days.”  The Operation Prime-Time tele-movie, “The Jesse Owens Story,” portraying Avery Brundage, CBS Entertainment’s, “First Steps,” and  Disney’s “Ollie Hopnoodle's Haven of Bliss” for PBS.
An actor he certainly is, with such chameleon characterizations as;  F.B.I. Director 'Denton Voyles' in Warner Brothers' feature film, “The Pelican Brief,” the enigmatic 'Col. Halsey' in Trimark Picture's “Final Approach,” a Mafia hit man opposite Gene Hackman and Anne Archer in “Narrow Margin,”

a Carolco picture released by Tri-Star,  the distressed father of a murdered son in Frank Yablans' 20th Century-Fox presentation of “Star Chamber,” and 'Sgt. Kenneth R. Montone' in “Outland” with Sean Connery.

James compliments his credits with appearances as; ‘Doug Meeks’ in the hit comedy, ‘Reverend Foote’ in Columbia Pictures “Made of Honor,”

a CIA agent in “Scorpio,” a cameo role in “Star Trek III - The Search for Spock,” “The Competition,” with Richard Dreyfuss,

“Capricorn One,” “The Electric Horseman,” with Robert Redford and Jane Fonda,  He also appeared in “The Terminal Man”  the head of the vice squad in “The New Centurions,” and a professional assassin in “Point Blank”

James is a native of Los Angeles.  He attended El Segundo High School and earned a B.A. degree in Theatre Arts from UCLA. He met his wife, Florine, at UCLA.

“I was originally sent to a special warfare school in Fort Bragg, North Carolina, to study psychological warfare and become part of the sneaky troops.

Then when Kennedy was President, I got called up again for the Berlin Wall.”

James comes from a family of three brothers and a sister.  His parents, now deceased, were Unity ministers.  He is the youngest and named after author James Barrie.  It seems a perfect choice.  There is a bit of Peter Pan in James... his sense of imagination appears whether playing roles on stage or screen

.
Stage work has included: Falcon Theater’s west coast Premiere of “Exit Strategy,” the play written by Bill Semans and Roy M. Close and directed by Casey Stangle, “The Big Knife” on the London stage and he starred in the L.A. Public Theatre's Production of “Put Them All Together.”  He also toured in Neil Simon's “Plaza Suite” and appeared in the West Coast Premiere of “Nobody Loves an Albatross.”
James does not limit his exploratory urges or senses of fun to his acting.
When he and Florine married, “we took what little money we had and spent a year in Europe driving around.”  They had an extraordinary experience they now cherish.
James and Florine live in Los Angeles.  Emily, their daughter, is a doctor,

and is married to Mallory “Chip” Milam.

and Maddie. Their son, Andrew, is an actor-chef.  He and his wife, Paula, have two daughters, Lola
James and Gemma Blue.
James is an avid sportsman and participates in various charity sporting events. He loves to cook, even though Florine is the expert with three cookbooks to her credit.   They collect wine and have over 1500 bottles. “I'm not an expert,

but enjoy the hobby. I have learned to buy inexpensive new wines and put them away and before you know it you have quite a nice bottle to share,” said James.

Whether it is in film, on the stage or on television, it is readily apparent that James B. Sikking’s talent, integrity and imagination will continue to intrigue and delight audiences in whatever medium he chooses to appear.