Exclusive interview about Viktorija Faith based in London Actress, Singer and Writer. 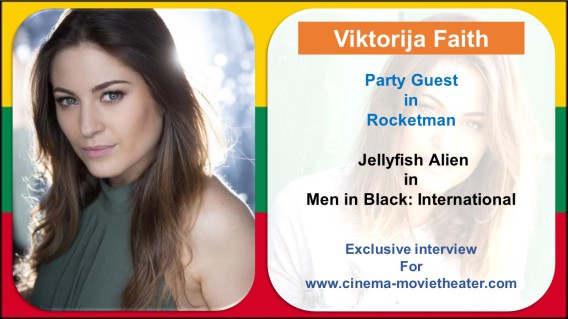 Hi Viktorija, first I'm very glad to do this interview about you.

First and foremost all I’d like to show my appreciation and to thank you before hand for this opportunity to be interviewed.
It means a lot for aspiring actress like myself to be able to share my experience on set, because as you know I was only playing small parts in the World wide movies, in fact non speaking parts. So thank you once again.

What did you like about the storyline and your role in Rocketman and Men in Black: International?

Story lines for both movies are pretty fascinating and as everybody else I can’t wait to see the final results on a big screen.
Even tho my parts in those incredible movies were extremely small I was very excited to take them and see the inside process of filmmaking.
It was amazing learning curve and I felt really blessed to start my acting career like that. It was a great opportunity that launched my career to the next level
and thanks to it I’ve had a chance not only to see how big movies are made,
but also to meet new people and of course learn from the best.

How was the filming with the director Dexter Fletcher (Rocketman) and F. Gary Gray (Men in Black: International)?

As a budding actress I felt incredibly privileged to be able to watch how those movies are made and the way directors communicated with the whole team.
I was truly impressed that worldwide known filmmaker were very humbled
and positive on set, making everybody feel as we were a part of a whole and
a part of a big team.

I truly hope and dream that I will get the opportunity to work with them again soon, now that I have a representation, and will be able to audition for a bigger parts in their future movies.

I read in your biography that you performed at 7 years old in theatre too.

What do you bring to the theatre that you do not find in the cinema?

Theatre and Films have entirely different acting approach I feel lucky to have the opportunity to study screen acting in LA few years ago where I learned
so much about acting for films.

Theatre your voice has to be projected loud and in Films you have got to keep the levels down, generally speaking.

Acting itself is bigger on stage, you don’t do that in a movie.

You are singer too, can you tell us more?

Yes, before I left UK to study acting in LA I graduated from University of West London where I studied music ( singing+ production + management) so I’ve made a number of records, written a number of songs and I had success at the international signing and songwriting competitions.
I intend to keep going with the songwriting as love doing it, this is another way of expressing myself.
In fact I have written an album that will be released next year with some of the songs that will be used as a soundtracks for the movie that I am producing and will be starring in as a lead actress.

When and why did you choose to be an actress and singer ?

All my life I was admiring artists who developed both careers acting and singing and I’d like to be one of those, who keep both of those talents activated.

I feel blessed and happy about my 2019 because it brought me few very exciting opportunities that I am currently working on.

One of them is that I’ve got a lead part in a musical, which is very challenging and requires a lot of work, preparation and dedication. I will be using all
my talents as an actress, a singer and a dancer.

And another great challenge for me that this year I am also producing my own film that also requires to gain so much new skills but at the same time its an amazing journey and I feel grateful.

I would like to wish everyone who is starting out, not to give up and have a lot of self believe. Also not to forget to mention that enjoying the journey, loving what you do is most important in this exciting industry of film making.