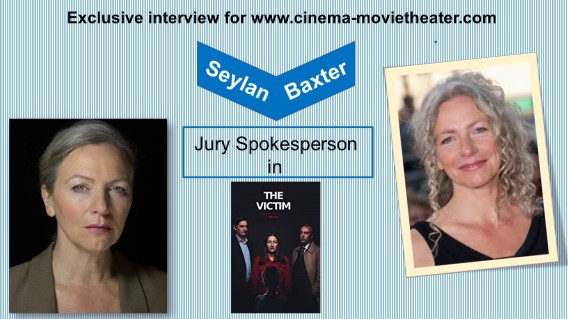 Hi Seylan, I'm very happy to do this interview.

When you read the script, what did you like about the storyline and your role of Jury Spokesperson in The Victim ?

The plot is gripping and very emotional with many twists and turns. I could see right away that it could be a fantastic series with a good team working on it and it certainly had that.

It's also very thought-provoking, causing the audience to constantly ask themselves who really is the victim, not just in this story but in crime in general.

How was the filming with your co-stars and the creator Rob Williams ?

It was a great experience with actors who were not only skilful and
talented but also lots of fun to be around. Rob was also lovely, as well all of the crew.

Only with James Harkness, who plays Craig Myers - we were both in Macbeth, directed by Justin Kurzel and starring Michael Fassbender and Marion Cotillard.

You are Scottish Folk Cellist and Folk Singer too.
When and why did you choose to be an Actress, a Cellist and a Singer ?

I began playing cello at school, when I was 10 years old, but completed a degree in Scottish Traditional Music in 2007 then began performing in the UK, Europe and further afield.
I fell into acting even later, when I unexpectedly and almost accidentally got the role of one of the witches in the film of Macbeth, mentioned above.

I'm Laird of Glencoe and of Lochaber because I bought a plot with Highland Titles . It is nature reserves in Scotland.
Because I found it is great Idea, I did to plant a tree too. With this text : "This tree symbolyzes peace and friendship between France and Scotland"
Did you know this nature reserve ?

I've heard of this scheme, yes, but don't know much about it.
t's really nice that you honoured the 'Auld Alliance' (between France and Scotland).

I've just been doing some filming for a BBC series and

I don't think so, except that I hope you enjoy the series!