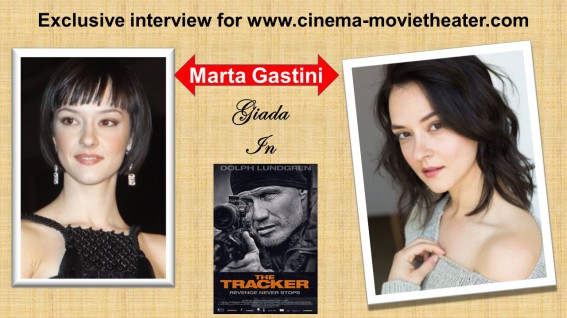 Hi Marta, I'm very glad to do this interview.

What did you like about the storyline and your role in The Tracker ?

‘Initially I really liked the idea of being in an action movie and the action/fighting scenes that my character had.. unfortunately they were all cut out ? it can happen.’

How was the filming with your co-stars and the director Giorgio Serafini ?

‘Giorgio Serafini is the first director I ever worked with in my career, therefore

it was very nice to be on the same set again 10 years after. As far as my

co-stars they were all very nice to work with.’

Did you know your co-stars before ?

‘I only knew Cosimo Fusco. We worked together with Giorgio Serefani on the Italian Tv series “Il Bene e il Male”. The others I met on the set of The Tracker’.

I read on your biography
..........she debuted as an actress on Italian television in January 2009 with the television miniseriesIl Bene e il Male("Good and Evil"), followed by a starring role in the prime-time miniseries L'uomo che cavalcava nel buio ("The Man Who Rode in the Dark")........
When and why did you choose to be an actress ?

‘I decided I wanted to be an actress when I was 17.
At first It felt like a necessity, the necessity to express feelings
I wouldn’t allow myself to persue in real life.
It was immediately natural, organic, both being on a stage and being in front of a camera. It was fun, a lot of fun, it made me feel alive.
I decided I wanted to try and make acting my professional life.’

Could you tell us  more about your role and the storyline in Black Parthenope ?

‘I play Giada, the very young lover of Jenna Thiam’s character’s father.
Despite the tension between the two women, Giada is the one that tries to find
a way to be friends. I cannot say much about the story though.
BP is a thriller set and almost completely shot in the Naples Underground,
that is a huge area (27km2) under Naples.
Alessandro Giglio directed it, and the cast also included Nicola Nocella and Giovanni Esposito, two great Italian actors!’

Since a few years, you became a spokeswoman for FarexBene.  Can you tell us about your role and what is the purpose of this association ?

‘FareXBene is a nonprofit association that fights any form of violence and discrimination, especially those against the weakest.
It mainly concentrates on sensitazing and preventing violence against women, bullying in schools and cyber bullying.
I decided to become involved and help FareXBene because I want to support their cause and I believes in their honesty and hardworking.’

‘I have a very interesting project ahead of me that I will soon share with everybody on my socials, especially on my Instagram page @martagastini.
Stay tuned!’